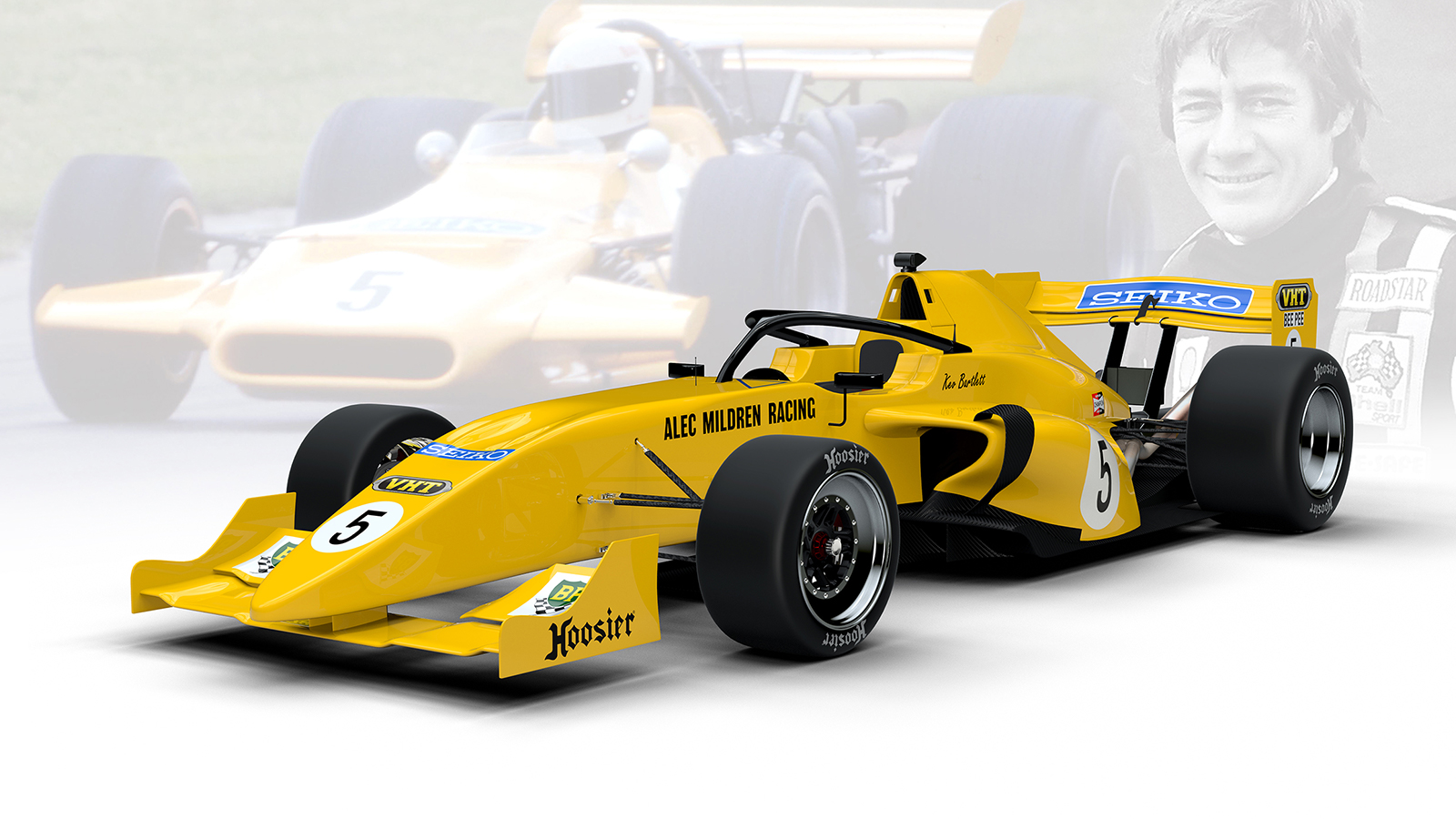 Legendary racer Kevin Bartlett has received an unlikely 80th birthday gift that celebrates his career while also pointing to the future.

One of the Mount Panorama winner’s early single-seaters has been born again through a commemorative livery on a modern S5000 racer.

It is the third in a series of 10 retro liveries that have been created by Scott Yorston to celebrate the colours of the bellowing V8-powered Formula 5000s of the 1970s in a modern S5000 context.

Bartlett, best known as plain-and-simple ‘KB’ but also ‘Big Rev Kev’, was one of the earliest Formula 5000 stars and raced against rivals including Frank Gardner, John Surtees, Warwick Brown and Bruce Allison before he turned his hand to touring cars.

“I’m associated with racing from the historic aspect, so it sits well with me. I like it,” Bartlett tells Race News.

“It looks pretty good. And I have some good memories.”

The car in question is the unique Mildren 5000, originally known as the Franklen, which Bartlett drove for Sydney car dealer and team owner Alec Mildren before upgrading to a long string of Lola cars.

The choice of the portrait car is unusual for Bartlett, because he is best known for his red Lola racers from the T300 to the T400.

“I guess it’s about cigarette advertising. We had it then but you can’t have it now,” says Bartlett.

Artist Scott Yorston, who created the visuals for all 10 of the S5000 retro liveries, confirms the cigarette cut-off but says there is still plenty of choice.

“It’s awesome to do the historic liveries. I’m only 44, so those cars were before my time and I didn’t know how big Formula 5000 was in Australia.

“It takes up to five hours to do one properly. And the most difficult part is getting enough good images of the old cars.”

Bartlett says the work on the Franklen is spot-on, right down to the yellow bodywork.

“Alex Mildren always liked the colour of the official vehicles at Sydney airport, which he said were easy to see. So when it came to colour for the Mildren cars he always said it was Department of Civic Aviation yellow,” Bartlett laughs.

He is now retired to Queensland but warned his family against any sort of an 80th party, even though he is still “busy as buggery”.

Bartlett recalls the giant crashes in Formula 5000 which gave many drivers a ‘Lola Limp’ after the front-end collapsed around their legs in an impact.

“I hardly limp at all these days. But I’ve also lost a lot of weight,” he says.

“I got embarrassed about it and decided to do something. So I’ve lost 23 kilos, 23.5 to be precise.”

That attention to detail is typical of Bartlett, who raced from Bathurst to Macau and the USA in single-seaters, and even once tried to qualify for the Indianapolis 500. His Bathurst win with John Goss in a Ford Falcon and then the famous Channel 9 Camaro and finally Mitsubishi Starions and a DeTomaso Pantera sports car came much later.

Ironically, his final Formula 5000 crash at Sandown was not in a Lola but a Brabham.

“My first choice of cars is still open-wheelers. The touring car thing was a case of ‘have to’. If you still felt you were still competitive you had to keep going.

“The reason I stopped open-wheelers was because I’d run out of Bugs Bunny’. And I promised my wife Rana when I got out of hospital that time that I wouldn’t get back into a Formula 5000. But I still got back into race cars, of course.”

And he knows his greatest achievement.

“I only had two major crashes – Sandown in the Brabham and Pukekohe in the Lola. A major crash is when the ambulance comes and they have to pull you out of the car.”

Bartlett has hundreds of funny stories, about racing and his mates, but is surprisingly protective of his long-term relationship with Kerry Packer. The media baron backed him in his road-car business and also provided the cash for the Nine Camaro, but Bartlett is not using his 80th as an excuse to open up.

“I’m rather private with the things we used to get up to. He deserved respect and I give him respect, even if he’s gone.

His 80th gave Bartlett another surprising reason to celebrate, as his telephone started to vibrate.

“I’ve had four old girlfriends message me. All before I was married, of course.

“And how does Rana feel? I didn’t tell her,” Bartlett laughs.

In this article:Featured, S5000