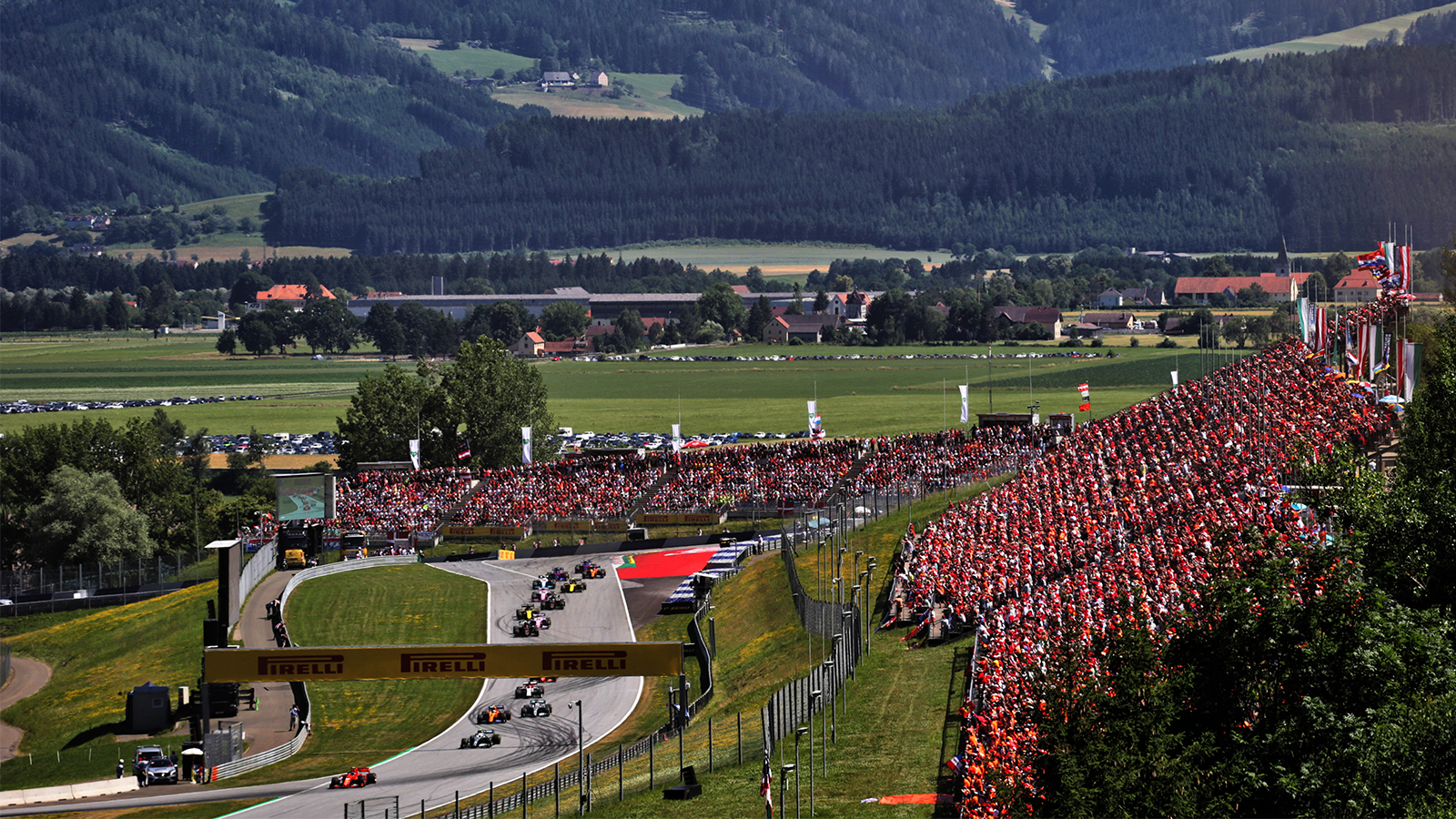 Grand Prix racing is set to go in Austria from July 5.

Formula One has finally published a calendar, or at least the first eight events in Europe, as the Red Bull Ring is prepared to host the return of competition.

The number of events itself is significant, since eight races are required for an official world championship, although work is continuing on other races.

It is going to be an action-packed time for those who attend – although the races will be closed and we don’t yet know the policy for the media.

There will be seven grands prix in nine weeks and they will start, as expected, on July 5 with the Austrian Grand Prix at the Red Bull Ring.

A second race at the same track, to be called the Grand Prix of Steiermark after the region where the track is located, will be held a week later.

There will then be a race in Budapest on July 17.

F1 teams will then go to the UK for a weekend off before a British GP at Silverstone on August 2 and a second race, to be called the Formula 1 70th Anniversary Grand Prix, on August 9.

These will be followed by a race in Spain on August 16, then another weekend off before a race at Spa on August 30, followed a week later by the Italian Grand Prix at Monza.

“It is currently expected that the opening races will be closed events, but it is hoped fans will be able to join events again when it is safe to do so,” F1 says in a statement.

“The opening calendar will include holding two consecutive events at the same circuit one week apart as well as a number of back to back events. The health and safety of all involved will continue to be priority number one, with the FIA and Formula 1 having a robust and detailed plan to ensure our races maintain the highest level of safety with strict procedures in place.”

The F1 races will be accompanied by Formula 2 and Formula 3 events.

Confirmation of the calendar comes after critical moves in Britain, where most F1 teams are based, on quarantine rules to allow travel by sporting teams.

Britain’s Department of Digital, Culture, Media and Sport has issued guidance which outlines the facilities and processes that will need to be in place for events to take place, including the proviso that there will be no spectators. Each sport will be required to submit and gain approval with detailed plans of movements and activities.

“The wait is over. Live British sport will shortly be back on in safe and carefully controlled environments,” says Oliver Dowden, the relevant Secretary of State.

“This guidance provides the safe framework for sports to resume competitions behind closed doors. It is now up to individual sports to confirm they can meet these protocols and decide when it’s right for them to restart.”

The guidelines mean that all competitors and people involved – including teams, support staff, officials and media – must travel individually and by private transport where possible and will need to be screened regularly for coronavirus symptoms.

F1 says “we welcome the government’s efforts to ensure elite sport can continue to operate and their support for our return to racing. We will maintain a close dialogue with them in the coming weeks as we prepare to start our season in the first week of July”.

Dowden specifically mentioned Formula 1 and it was reported last week in The Times newspaper that Prime Minister Boris Johnson expressly insisted that F1 be included in the exemptions from Britain’s quarantine rules because of the importance of the industry. This has not been confirmed, but it is known that the F1 group was lobbying for an exemption.

The F1 world is already working on plans to hold safe races and has to meet similar rules in other countries, notably Austria.

The Austrian health minister, Rudolf Anschober, says that the events at the Red Bull Ring can go ahead if there are “strict hygienic measures and regular tests and health checks for the teams and their employees”.

Anyone wishing to enter Austria must present a medical certificate that shows a negative molecular biological test for COVID-19 at the port of entry. However, there are still restrictions on most travellers for the moment with only a limited number of exemptions.

The European Union countries are planning to consider lifting quarantine measures in the middle of June.

Teams will be limited to 60 operational staff, with only 80 people allowed on site.

Although the calendar is now confirmed, the sport has yet to give details about how these events will operate.

But the teams will basically be operating in ‘family units’ and will not interact with other teams.

Even the drivers’ briefing will be conducted using Zoom in an effort to ensure that the risks of spreading the disease inside the paddock are minimised.

This would suggest that there will be very limited access on-site for the media and TV companies, relying on live television pictures with studio footage edited into the broadcasts.

It remains to be seen what happens with traditional journalists and photographers, but it is increasingly likely that those who attend will have to work in pool conditions, which is not ideal, but perhaps better than relying only on information from the Formula 1 group.

F1 is also expected to experiment with some new ideas with the planned races this summer and might follow NASCAR in going for shorter races with a reversed grid positions to set the starting order for the qualifying races.

This would create a way to differentiate between the two races at the same venues, although purists would obviously not be keen.

A decision will be made in the next few days on the future of the Singapore Grand Prix. There have been nearly 35,000 COVID-19 cases in Singapore but only 23 people have died.

Non-essential activities and social gatherings remain prohibited, with sports and recreation facilities closed. The government says that if the daily infection rates remain low and stable over the next few weeks then the country will be able to move into Phase Two of its re-opening plan, when sports, recreation and outdoor facilities will be allowed to start up again, although gatherings will still be limited, even in Phase 3.

All of this suggests that there will not be time for all the necessary steps to be taken given that the work required to build the necessary infrastructure is three months, and the race is scheduled for September 20.

What is clear is that if the infection rate does not slow in the coming days the race would need to be without spectators – and no-one wants that to happen – or is willing to pay for it.

Chan Chun Sing, the Minister of Trade and Industry, says that studies are still required to see what is possible.

“We will not be able to conclude at this point in time as to whether it is on because these are ongoing discussions” he says.

Given the current situation, the race is unlikely to go ahead because of problems with the staffing of the construction work. – and the fact that even if there is a race, there is no guarantee that visitors will attend.

One suggestions is that the race in Baku could take Singapore’s date.

The calendar news follows confirmation from the FIA World Council of new rules that will redefine the way in which Formula 1 operates in the future, with the changes coming to limit spending. FIA President Jean Todt has hailed the changes as “a major step forward for Formula 1 and motor sport’s sustainability.

In addition to the spending cuts there will be a freeze on a long list of components between 2020 and 2021, including the chassis, gearbox, mechanical components and impact structures.

In effect this means that the 2020 cars will be raced again in 2021. For 2020 there will also be a limitation on the power unit upgrades and a restriction on test bench development.

For 2021, there will be a further reduction in aerodynamic testing, and the introduction of a bias between championship position and aerodynamic testing which amounts to a form or handicapping that ought to help the smaller teams to compete.