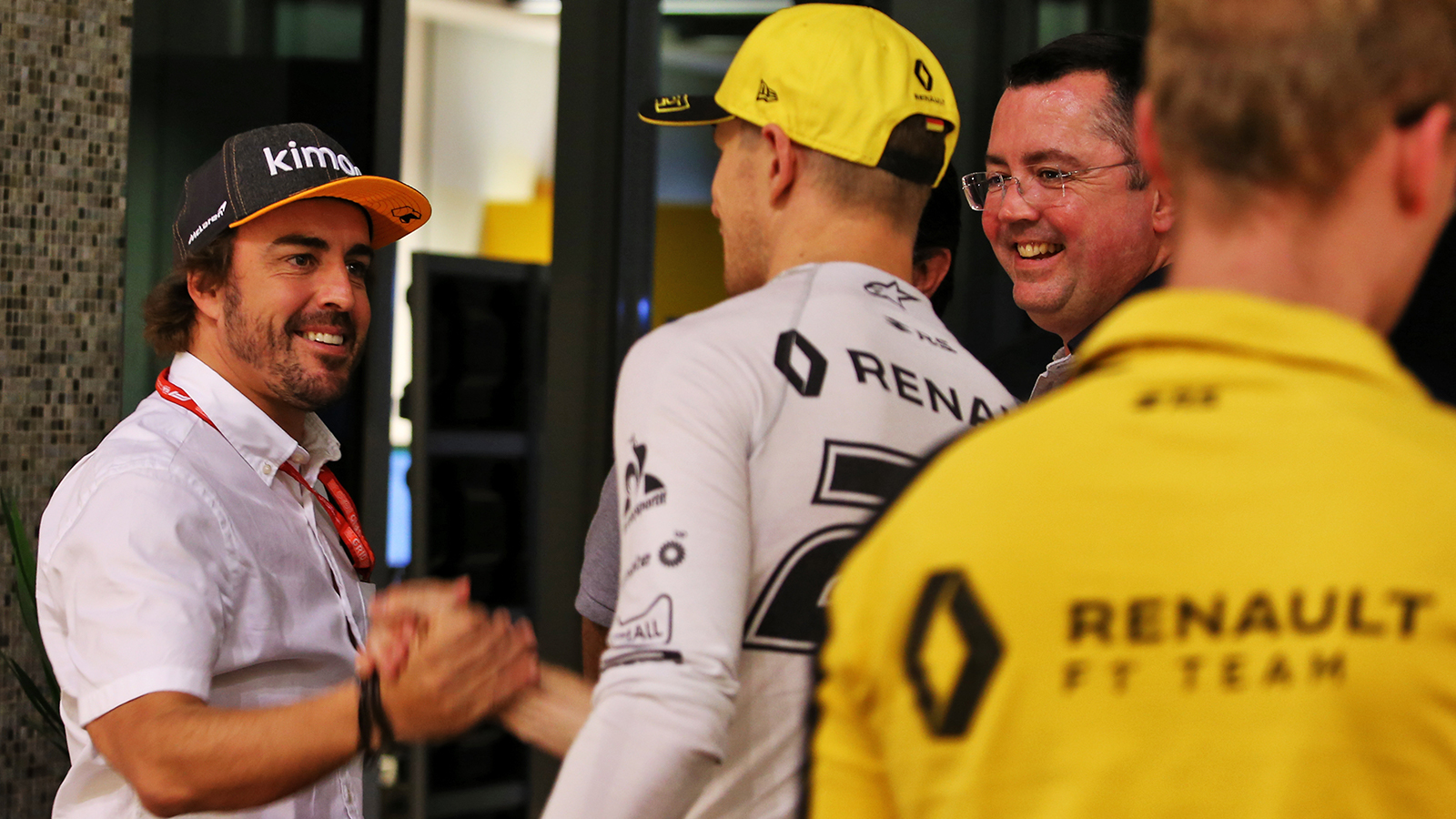 Two-time world champion Fernando Alonso is returning to Formula One next year.

The feisty Spaniard is taking the Renault seat left vacant by Daniel Ricciardo and will race alongside Esteban Ocon.

In a high-powered game of musical chairs, the move may have unwittingly snookered four-time world champ Sebastien Vettel into early retirement as the Ferrari driver is on the hunt for a new seat after being given notice by the Scuderia that his services will not be required next year.

Despite many contracts up for renewal at the end of the year, the reality is that options were already slim for Vettel but are now near impossible for a top-tier drive.

Renault is nothing new for Alonso, who won his two world titles with the French team in 2005 and 2006.

But then came a controversial return which ended with ‘crash-gate’ in Singapore in 2009 before Alonso moved to Ferrari, and then to McLaren.

Now Alonso is being welcomed back like the prodigal son – for a third time – at Renault.

After leaving F1 in 2018, the Spaniard has kept himself busy, winning the World Endurance Championship and the LeMans 24-Hour enduro in 2018 and 2019 for Gazoo Toyota as well as having two attempts at the Indianapolis 500 with a third due next month with McLaren.

He took part in a series of desert raids with Toyota, piloting a HiLux across North Africa and the Middle East last year as preparation for this Dakar in which he was a commendable 13th, including a best state time, despite a rollover.

His long-time manager and former Renault team owner, Flavio Briatore claimed in May that Alonso was “motivated and keen to return to F1” and it is believed he had his first meeting with Renault as far back as last November.

Meanwhile, Vettel’s close friend and former F1 boss, Bernie Ecclestone suggested this week that the German should also take a sabbatical from F1 and come back fighting in 2022.

“I’ve been talking to Sebastian a lot lately and I advised him that the truth about the separation from Ferrari must come out on the table,” the former F1 ringmaster says.

“He should take a year off in 2021 and then position himself in time for 2022. He shouldn’t dream of Mercedes,” he said.

As Ecclestone suggests, both Mercedes seats are available though it seems Hamilton will re-sign and Bottas virtually secured his new deal with a brilliant win in Austria last weekend.

Would Hamilton accept an equal Number One teammate for the first time at Mercedes? That’s also up for debate.

Red Bull’s Max Verstappen says he would welcome Vettel into his garage if that became an option, though current teammate Alex Albon is quickly cementing his place as a star of the future with a strong second half of last year followed by an almost certainly robbed victory on the weekend.

Vettel’s age, at 33, also goes against the Red Bull ethos of promoting youth for its brand despite his close ties with team advisor Helmut Marko.

“I called Helmut immediately after the separation from Ferrari,” Vettel told Austrian TV on Monday.

“But not to ask if he had a place but because I get on very well with him and he has been a confidante for years.”

For his part, Verstappen offered an olive branch.

“Two winning drivers in one team can work, just like Daniel (Ricciardo) and me. I wouldn’t have a problem with Seb as a teammate.”

The only other paid driver that could be open to Vettel is at the much-improved Racing Point Mercedes which becomes Aston Martin Racing next year.

The stumbling block there, however, is that both drivers, Sergio Perez and Lance Stroll, bring enormous funding. Perez has Mexican connections with telco giant Telmex that is owned by the motor race-loving multi-billionaire Carlos Slim, while Stroll’s dad, Lawrence owns the team.

Other teams who have yet to sign their drivers such as Alfa Romeo, Alpha Tauri and Haas don’t have pockets deep enough, nor a car competitive enough to keep Seb interested.