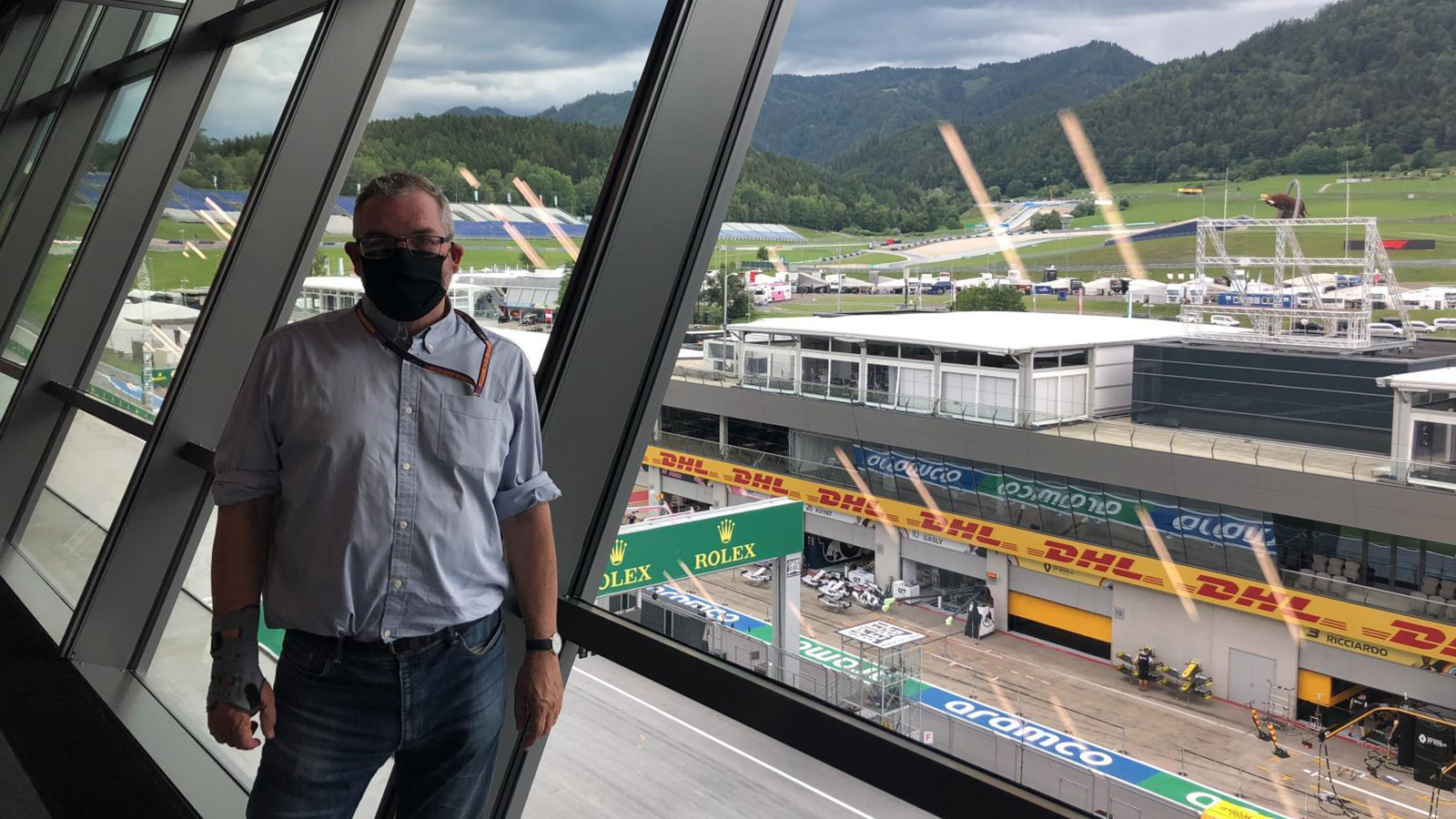 On Sunday evening at the Red Bull Ring, they came to the media centre and gave each of the 22 journalists present a poster, a Spielberg mask and a letter.

“What a historic start to the F1 season 2020 at the Red Bull Ring at Spielberg,” it says.

“We want to say thank you for the cooperation and look back with pride over the last two weeks. To remember the first FIA Formula 1 double Grand Prix in time, we made a special print from the official poster for you. We hope to welcome all of you next year and wish you a good further season with many exciting races!”

It is a nice gesture but I am just a little bit annoyed.

Why? Well, because I had figured out as soon as I arrived in Austria that a poster or a program of the two races would be a very valuable thing one day and I asked immediately if such things existed.

I checked with the F1 group and was told the same story.

But what I don’t mention to anyone is that I had seen a poster on the wall when I went to pick up my car pass, so I knew that at least one existed somewhere and the fewer there are the more valuable they become.

I suspect there are quite a lot of Australian GP 2020 posters out there, and they will have value because no race took place. It is not the piece of paper that matters, so they tell me, it is the context and while I am no expert, nor really a collector, I had read somewhere that the best forms of investment in recent years have not been stocks and shares, nor even gold, but rather exotic wine, artworks, classic cars and other such ephemera.

I noted that an original movie poster for the 1931 Dracula film sold a couple of years ago for $760,000 and so I figured that my grandchildren might benefit (considerably) if I stash away Australian and Austrian GP posters from 2020.

As a consequence of seeing the poster on the wall, I dropped into the same office a week later to ask if I needed a different car pass. The place was closed up and the poster was gone.

But there was an office and so I knocked on the door, asked about the car pass, and mentioned that I’d really like to get one of the posters that I had seen. Where might I find one?

She gave me two, each taped at the corners, and I was pretty sure one of them was the original I had seen.

I was excited, but I didn’t mention this to my press colleagues because I wanted to have the only two in existence…

So on Sunday evening I laughed out loud when they came around with the posters. So now I have three original Austrian/Styrian GP posters.

I suppose it would be a bright idea to get Lewis and Valtteri to sign one of them. But, of course, in the “new normal” in F1 that is not possible because we cannot meet face-to-face, at least for the foreseeable future.

This “new normal” is weird.

On the Monday after the Styrian GP I was walking in a local town when I bumped into someone from the F1 Paddock bubble. We are not supposed to get too close to one another and so, standing at a suitable distance apart, we had a brief conversation which ended with the words: “I won’t see you in Hungary”…

Human beings, however, are endlessly adaptable and one can get used to anything.

If you live in fear of a nasal swab for COVID-19, don’t worry too much. You get used to it. My last one should have been a bit of a horror story, but it didn’t really bother me.

The girl in the tent at the gates of the Red Bull Ring was clearly more nervous about it than I was and confessed that it was going to be her first time. My heart sank. When it comes to nasal swabs you really want someone with some experience… She froze when the swab was nearly there and someone else had to take over but it really didn’t bother me. I felt sorry for the poor girl.

Using various machines (and having the right numbers and addresses) I was able to keep at least some contact with the paddock during the Styrian weekend.

It emerged the isolated paddock people were really enjoying themselves (except the folk at Ferrari) as the number of distractions was greatly reduced. There were no functions, no tiresome VIP guests – and no media.

It was just motor racing and for some this was a breath of fresh air, a mini version of lockdown.

It all seemed a little pointless but we were able to tell the world about two pretty interesting races, about how F1 people went through 9000 COVID-19 tests without a single positive one among them and really that was the point.

In order to get F1 up and running again it was vital to prove that the biosphere (or bubble) theory worked. The same point was made with the podium ceremonies as F1 chose to use (rather naff) radio-controlled boxes on wheels to deliver the trophies to the winners. But it was a novel way to deliver the message that F1 is safe and responsible.

“I’m delighted that we have got the Formula 1 season going with two cracking Grands Prix,” says F1’s Ross Brawn.

“There will be positive tests, I’m sure of it. When we do get those positive tests, we have to make sure we deal with them in the correct and proper fashion to minimise the impact they have on F1.

“It’s been a fantastic start. Everyone is so pleased and relieved that we have got the season going. Given the pandemic has affected countries in different ways, we have to be flexible during the next six months, but we have a reasonable programme ahead of us and from the example of the first two races, we can have a fantastically exciting grand prix season.”

We didn’t know what to expect when we headed off to Austria, either in terms of living in bubbles or where the teams would be in the pecking order.

Now we have some idea about both but we will get more insights in Hungary, which is a very different kind of circuit.

To be honest, as I sit in a hotel close to the Hungarian border for a couple of days, I am a bit curious about what it will like there because the Hungarian government has made life a lot more difficult than the Austrians.

On Saturday the FIA issued a 19-page document giving details of the regulations in Hungary which mean that a large percentage of F1 people will have to stay within the confines of the Hungaroring circuit or in their hotels – and can only travel between the two and are not allowed to eat out, walk the streets or use public transport or any kind.

Anyone caught breaking the rules faces a $25,000 fine and might even be thrown in jail.

This applies to all non-European personnel and to the British who, while legally still part of the European Union, are leaving at the end of this year and so are the bad boys of Europe at the moment. A large percentage of the F1 circus are British and so there was a flutter of re-booking hotels and planning different transportation to avoid getting into trouble.

There were even rumours at one point that the Hungarian GP might be cancelled and a third race organised at the Red Bull Ring instead.

That would have been fine because I am very fond of Austria. They are good people.

This point was made once again as I was packing up to leave on Monday when Mr Kaufmann, the man who owns the guest house where I stay, came rushing up, as fast as an 80-year-old man on crutches can rush, and handed me a race program.

Actually, there were two. They were from the 1970 and 1971 Austrian Grands Prix and he was excited to show me that he had been there, an official “zeilrichter”, which means “judge at the finish line”. He told me that he had waved the chequered flag for that first GP at the Osterreichring.

When I handed the programs back to him, he said no. They were for me.

I was bowled over. I’m not quite sure what he said because my German is not that good, but I suspect that it was something along the lines of them being more useful to me than to an old man.

It was a lovely gesture from someone who shares my passion for Formula 1.