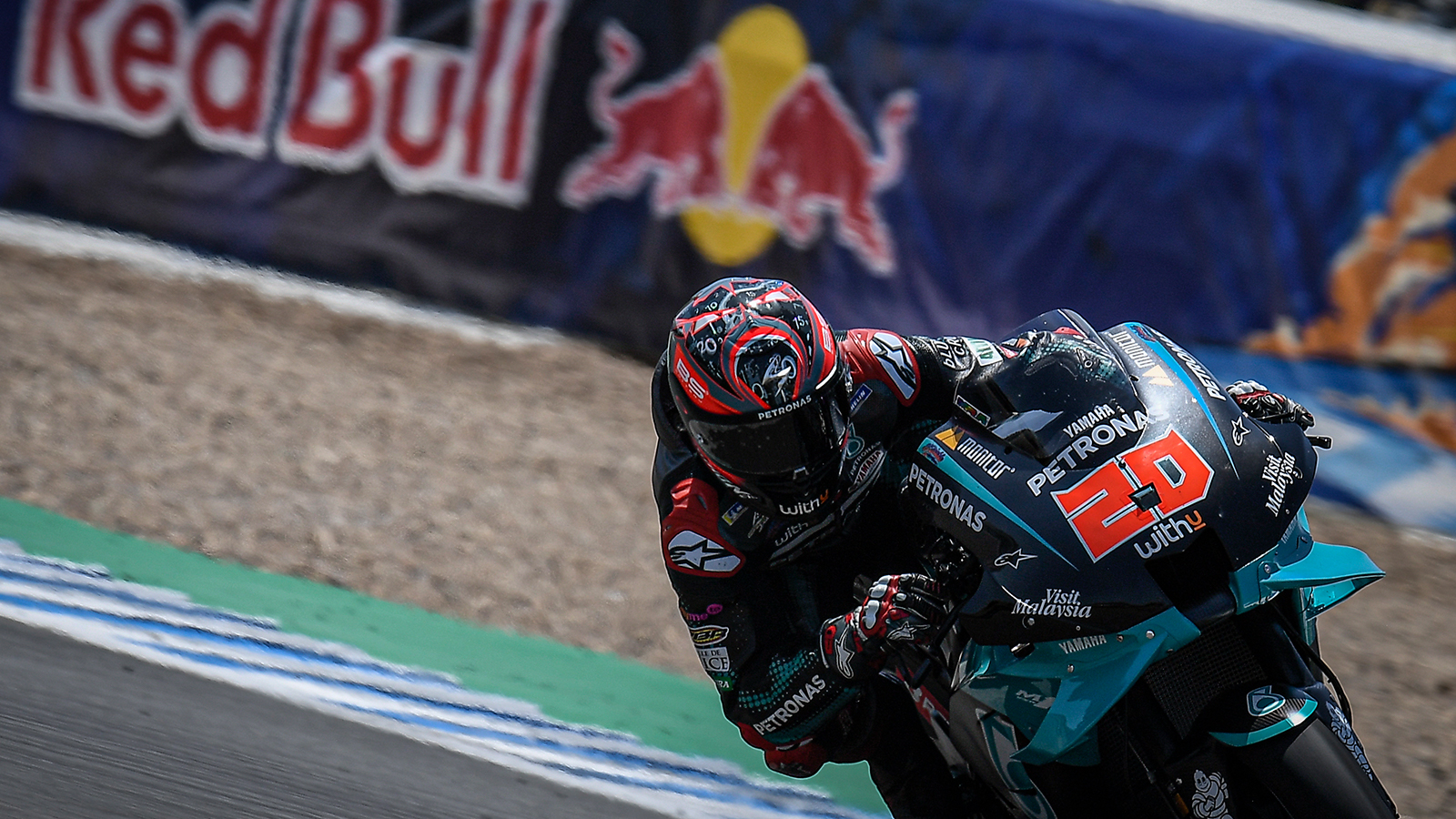 Marc Marquez is almost certain to surrender his MotoGP world championship crown in 2020.

Despite starring in the opening race in Spain, where he out-rode everyone in the field, a massive crash – his second of the day – sent him to hospital with a broken upper right arm.

Fast Frenchman Fabio Quartararo swooped when Marquez ran wide through the gravel early in the race and went on to score his first premier-class victory with an almost flawless performance from pole position.

Riding the satellite Petronas-Yamaha he was comfortably ahead of his 2021 Yamaha factory team mate Maverick Vinales, Ducati’s Andrea Dovizioso and Australian Jack Miller.

The 21-year-old, in only his second MotoGP season, has not only inherited Valentino Rossi’s position in the factory Yamaha outfit in 2021 but, more immediately, is a genuine title favourite after defending champion Marc Marquez suffered serious injuries during a horrendous high-side crash at Jerez.

The speedy Spaniard was airlifted to a Barcelona hospital immediately after the race for surgery this week on a fractured upper right arm that will more than likely prevent him racing in this week’s back-to-back return to Jerez for the Andalusian Grand Prix.

Marquez crashed out of third place with five laps left to run after delivering a demoralising fightback from a miraculous save while leading the early stages of the race.

The eight-time world champion, who started from third, was attempting to break the pack and open-up a substantial lead when he lost the front-end through the middle of the fast Turn 4 left-hander, somehow managing to lift the bike up with his elbow but subsequently forced to run wide into the gravel trap and rejoined the field in 16th place.

With super human speed and determination, Marquez picked off his rivals with sniper-like precision, clawing back into top 10 by lap 11 and then stealing the final podium position from Miller after the pair had an epic three-corner dice in the final sector of the track on lap 17.

But his merciless charge to hunt down the Yamaha pair ahead of him – and potentially his title defence – was over just a few corners later, the Spaniard clutching his right arm in pain while gifting Quartararo his debut MotoGP victory.

“F—-ing hell,” the Frenchman blurted to the pitlane TV cameras.

“This is the best moment of the my life already. This race was for the fans, and all of those affected by COVID.

Speaking in the post-race press conference, he added: “Get well soon {Marc}, that’s the first thing I can say. The crash was really big.

“Speedy recovery, hope to see you soon on track.”

Vinales also proved he is a serious championship challenger with a measured ride to second place, forced to manage a fading and fickle front-end for the final 15 laps as Yamaha gambled with a soft front tyre in the sweltering Spanish heat.

Dovizioso squeezed onto the podium when he dived past Miller on the penultimate lap, with Quartararo’s Petronas Yamaha team mate Franco Morbidelli almost taking the Aussie out trying to follow the Ducati veteran through but having to settle for fifth at the end.

Despite missing out on the champagne in fourth, it was a mature race from Miller. The Townsville ace was in the lead battle for the entire 26 laps, avoiding the temptation to break away when Vinales slowed the pace following Marquez’ first off-track excursion and never looking desperate in his defence as he fought elbow-to-elbow with the Spaniard moments before his race-ending accident.

While the new two-wheeled stars were shining, it was a bruising opening round of the 2020 for the veterans in the class. Rossi was running at the back of the top 10 before retiring his Yamaha with mechanical trouble while Honda’s Cal Crutchlow didn’t even make the start of the race after crashing heavily in the morning warm-up.