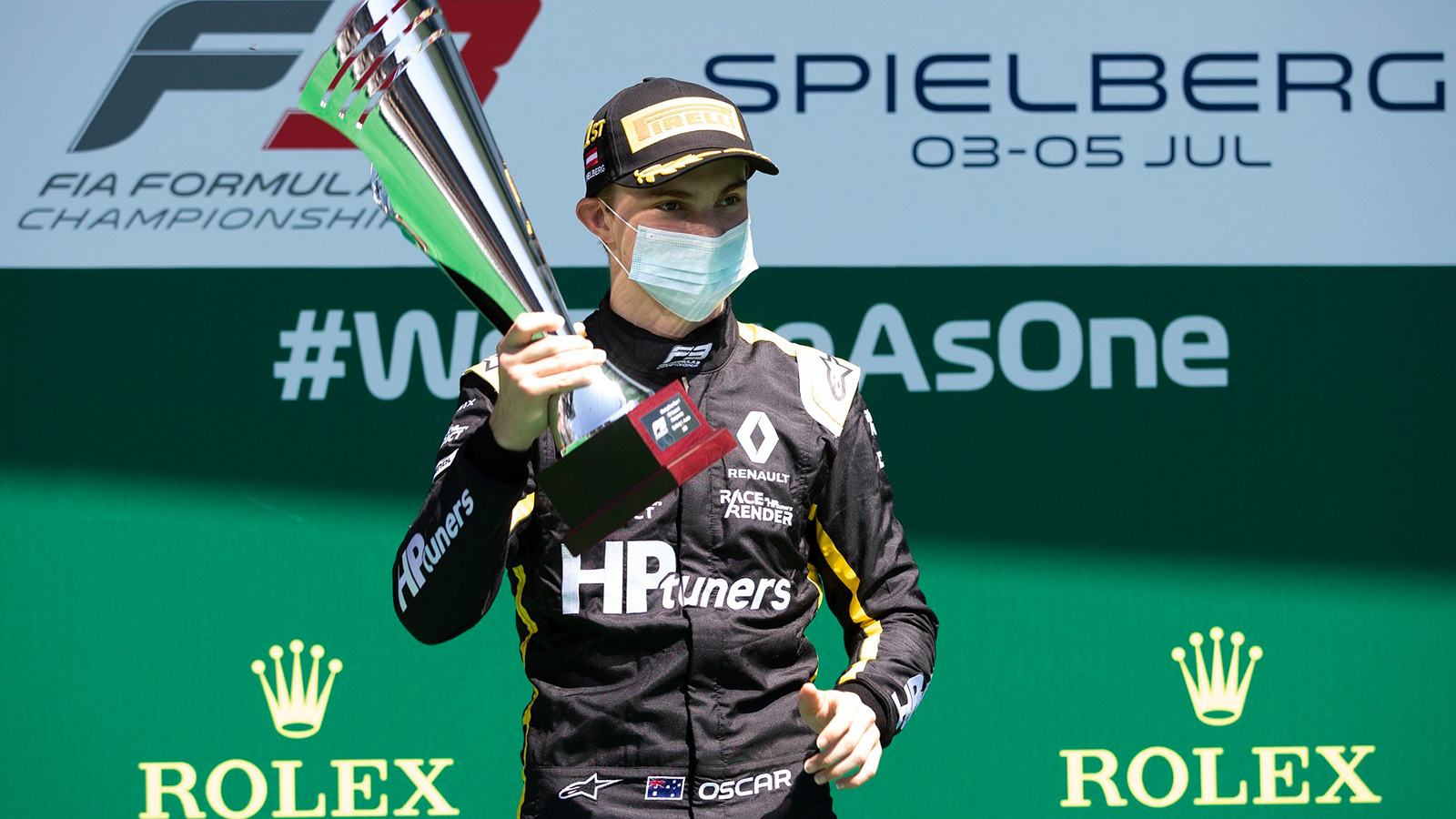 Oscar Piastri is ticking all the boxes as he drives towards a future in Formula One.

The Melbourne teenager is doing the job on the track, where he leads the FIA Formula 3 Championship after six races, but he has also qualified as a member or the Renault Sport Academy, drives for the crack PREMA Racing team, has retired F1 racer Mark Webber in his corner, and is winning the public relations race at home in Australia.

Winning the first race of the year in Austria was a huge boost and proves he has The Right Stuff.

“I want to be at the front, I want to win this year,” Piastri tells Race News.

“I set myself pretty high standards. I’m here trying to win. And Renault and everyone around me want me to win.”

2020 is another make-or-break year for Piastri, as he needs to win the F3 title – or at least star at the front – to continue up through Formula 2 in 2021 on the ladder to the grand prix grid.

He also needs to stand out from the three other Aussie youngsters – speedy Alex Peroni and rookies Calan Williams and Jack Doohan – who are also in F3 in 2020 and racing him to follow Daniel Ricciardo into F1.

After three meetings and six races, in a huge variety of weather conditions, Piastri has a solid 10-point lead in the championship through a series of front-running performances.

Each leg of the series starts with a Saturday sprint race in qualifying order, where Piastri has usually starred, before a Sunday feature where the Top 10 finishers from Saturday race from inverted starting positions in a format which rewards consistency over bravery.

Piastri has also proved his class by taking points for the fastest race lap.

He has made some giant sacrifices to succeed in motorsport, even leaving his family behind in Melbourne and continuing his education at a boarding school in the UK while he was racing.

“Obviously, going into boarding school was a bit of a schock. Maybe not a shock, but not what I was used to. But I actually found it very positive away from the track as it gave me something to focus on.”

It also helps that Piastri is not just an ordinary student.

“For me it was all pretty positive. And I was pretty bright at school and I did maths, physics and science as my A-level (school leaving) subjects.

“If I wasn’t a driver, I’d probably want to follow something along the engineering pathway. It’s always interested me and, even being a racing driver, knowing what set-up changes you can make is good.”

The common thread through the Piastri story is his dedication to the job, and the ability to deliver on promises. Even as a teenager.

“It mostly comes from me. I set standard. You’ve got to be doing it for youself more than anyone else,” he says.

His F3 program is scheduled to run for two years but he could easily be graduating as a rookie.

“I wasn’t really expecting to win the first race, to be honest. I expected to be up at the front, and I was hoping for a win at some time.

Even so, Piastri is not getting ahead of himself and is already thinking more about a championship than individual race wins.

In that way, he says his style is not as aggressive as Ricciardo and more like the calculated approach used by Webber.

“I’d say I’m not so much of the Ricciardo type,” he tells Race News.

“I wouldn’t really classify myself as the ‘just send it’ type, but I think my racecraft is pretty good. Generally I’d say I’m pretty calculated, weighting up the risk-versus-reward and being consistent in all aspects of my racing.”

Piastri says he is enjoying the extra speed and grip of the F3 car compared with his previous rides but has mixed feelings about the race formats and reversed grids.

“If you have the pace to be up the front and winning, it’s a little bit annoying,” he says.

“At the moment they are not my favourite. But it can easily work both ways. There can easily be a weekend when I’m at the back of the top 10.

“It can be more exciting, and definitley builds your racecraft, if you have to come through the field.”

The F3 series is still taking shape but Piastri is already looking forward, and one of his favourite tracks.

“Spa. Definitely Spa. It’s been my favourite over the last few years, since I drove on it for the first time,” he says.

“It’s historical, and it’s got Eau Rouge. I just like the layout, which is pretty good for racing. There are som big fast corners.

“Any racing driver, especially in a high-aero car, finds the faster corners are the more exciting ones. When goes wrong it goes wrong in a bigger way, but when it goes right you’re never going to get that feeling in any other car.”