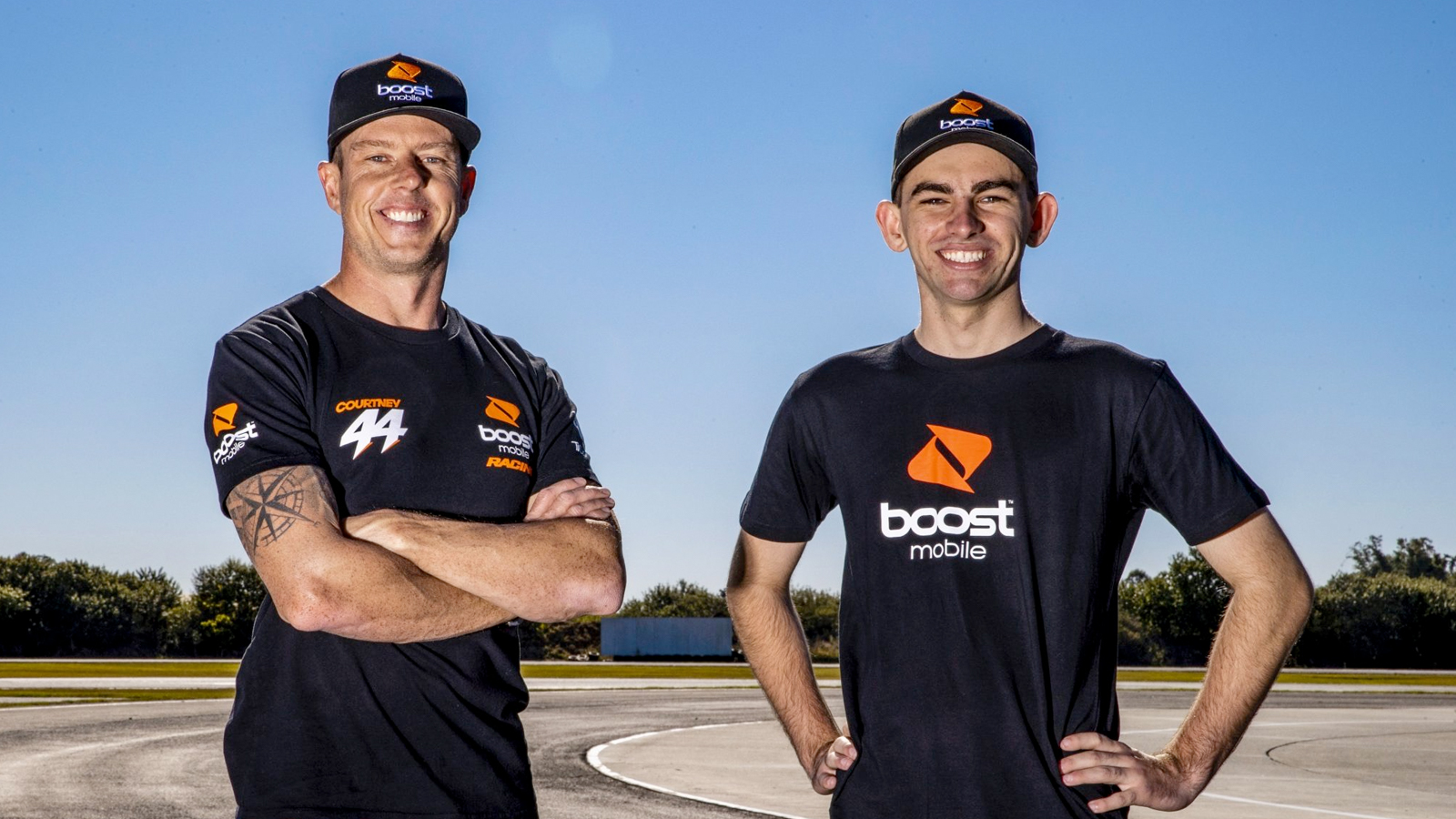 That’s the bounty put on the top step of the podium by live-wire Boost boss Peter Adderton.

But there is a catch – the bonus money is only available to one of his Boost-backed drivers.

Adderton, who lives in Los Angeles, posted on Twitter about his his cash splash in the lead-up to the second Supercars meeting at Sydney Motorsport Park as an extra sweetener for his Boost boys, Broc Feeney, Brodie Kosteki and James Courtney.

It followed his decision to pair Courtney and Feeney in the Boost Mustang for the Bathurst 1000 in October.

James Courtney only managed a fourth place at SMP 2.0 as he continued his improvement in the fourth Mustang in the Tickford stable, but both of the youngsters got tantalisingly close to the $10,000 payout during the combined Super2/Super3 races.

Kosteki was third in the second race, after 10th in the first, while Feeney got a fourth and then an eighth.

“Pete is trying to get some excitement into the sport and create a challenge for the three of us. That’s good,” Kosteki tells Race News.

“I got close with third in the second race, but I had a mechanical issue in Race 1 and that took me out of a good result for the weekend.

He says the cash would be welcome but it is not his motivation.

“I want to win every race, no matter what. But the bonus is a really good thing for the sport in general because motor racing is expensive.”

Feeney is still at high school and also learning in Supercars, giving him more incentive.

“I’m pretty excited and motivated to go out and get a win. I feel like Sunday in Sydney slipped away from me a little bit,” he says.

“I hope it’s still up for grabs and I’ll be out to get it at the next one.”

He knows exactly where the money will go if he is able to grab it.

“It’s not like I’m going to get the money and spend it on some fun toys. Every cent of that money would go back into my budget.

“I’d just put it towards my racing. We’re not too full-on with sponsors at the moment, so any money we get will go back into the racing budget. It could help to give me an extra year of racing.”

And Courtney, who was the second-best-paid driver in Supercars behind Craig Lowndes for much of his career?

“I’m not really motivated by money. It’s not going to make me pass someone. I will pass anyone I can, every time I can,” says Courtney.

“Pete does things to try and get attention. I’ll take it, that’s for sure, if I get a win. But it’s not going to make me try any harder.”

Courtney is already looking ahead to the Supercars double-header in Darwin but the Super2 pair are not sure when they will race again to get a crack at the cash.

“It’s going to be a tricky one. There are a few Super2 teams that come from Victoria and that’s the biggest obstacle,” says Kosteki.

“I’m keeping quite busy at the Norwell Motorplex, doing a bit of driver training, and I’m trying to drive every day to keep match fit.

“It’s a very fluid situation. Day-by-day things are changing. It’s a bummer not to race, but there are bigger problems in the world.”