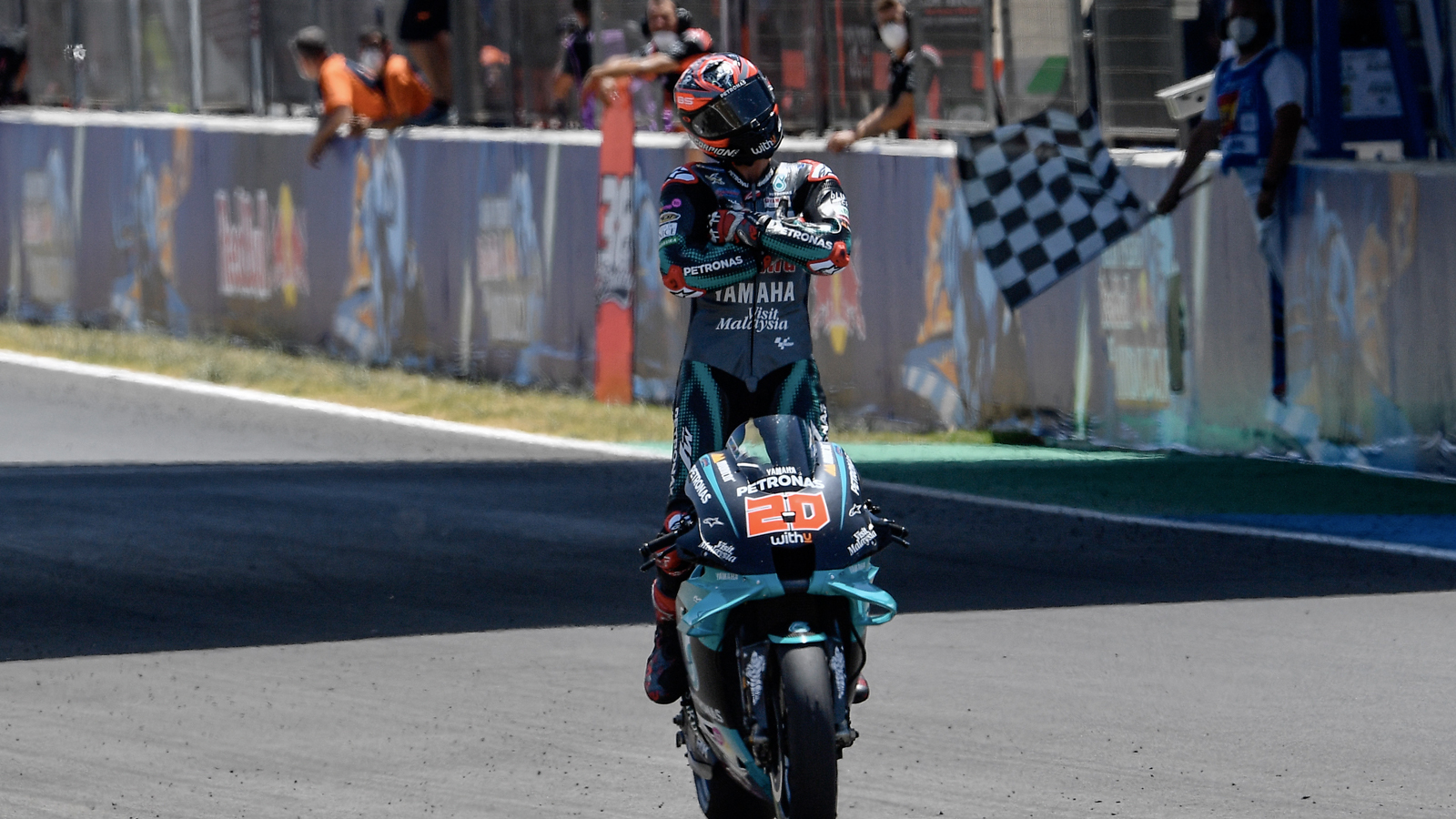 The sun is shining on Fabio Quartararo while Marc Marquez sits on the MotoGP sidelines.

The fast Frenchman scored his second successive win of the season in the Andalusian Grand Prix with a flawless and dominant lights-to-flag victory in searing conditions at Jerez.

Marquez didn’t even make the start after pain from his broken right arm forced him to park his Repsol Honda after a failed attempt at qualifying.

He won the hole shot from pole position and was never challenged throughout the 25 laps, breaking away from the pack early with a succession of demoralising fastest laps that gave him a comfortable buffer – up to eight seconds at one stage – to manage all the way to the flag.

Despite making it look like a walk in the park, the 21-year-old – who becomes the first French rider to win two premier class motorcycle grands prix and leads Vinales in the championship by 10 points – admitted the searing 40-degree conditions made the race difficult.

“Oh my god, that one was tough,” he reports.

“It’s an amazing feeling – this feels so good to make back-to-back victories.”

Vinales appeared to be suffering even more from the heat in second place and, having battled hard with Quartararo on the opening lap then delivered a hard dose of defensive medicine from ‘The Doctor’ for the majority of the race, the factory Yamaha team mates were never separated by more than 0.5 seconds for the entire distance.

“It was impossible to breathe,” says the Spaniard, referring to being tucked behind Rossi’s exhaust pipe in sweltering temperatures for almost an hour of racing.

“I felt very strong, and then I was stuck behind Vale for most of the race and I was destroyed. I waited for the last five laps and made it stick, but I am exhausted.”

Rossi, meanwhile, celebrated his 199th podium finish with the same level of effervescence as if it was his first – stopping on the side of the track to wave to the crowd (even though there wasn’t any), popping a straight-long wheelie and then greeted by his cheering team as he rolled through the pits.

“I am very, very happy because it has been such a long time,” the 41-year old beams after scoring his first podium finish since the 2018 US Grand Prix.

“This weekend we started to work in a different way. It is not like a victory… but is is similar.”

Japan’s Takaaki Nakagami lead the Honda charge with his best finish in fourth, from Suzuki’s Joan Mir, Ducati’s Andrea Dovizioso, KTM’s Pol Espargaro and rookie Alex Marquez staying upright to take advantage of the attrition ahead to move through from last place on the grid to eighth. Alex Rins soldiered through with a shoulder injury to complete the top 10.

The hot conditions took a toll on the entire field with eight retirements, including Australia’s Jack Miller who was in the early fight for a podium position before he lost the front end and slid-out on lap 11.

It was a double heartbreak for his Pramac Ducati outfit as his team mate Francesco Bagnaia sliced his way through to a comfortable second position, only for his bike to begin spewing smoke and forcing his retirement with just four laps to run.

Quartararo’s team mate Franco Morbidelli was also on track to score his first podium finish, clawing his way onto the back of the Rossi/Vinales battle and seemingly having more pace than both of them, but then, just as he crossed the finish line with 10 laps to run, he suddenly stopped on the side of the circuit with mechanical trouble.

Quartararo is now confidently at the top of the championship ladder with a maximum 50 points, 10 clear of Vinales with Dovizioso, Nakagami and Espargaro completing the top five. Miller sits in seventh position with 13 points.

But everyone is still wondering about Marquez, who has zero points but is aiming for a return to racing at the next race at Brno in the Czech Republic.

Sprints Only For Supercars

The Supercars calendar for the rest of 2020 is looking clearer with a firm go-ahead for back-to-back races in Darwin. The first Darwin race...