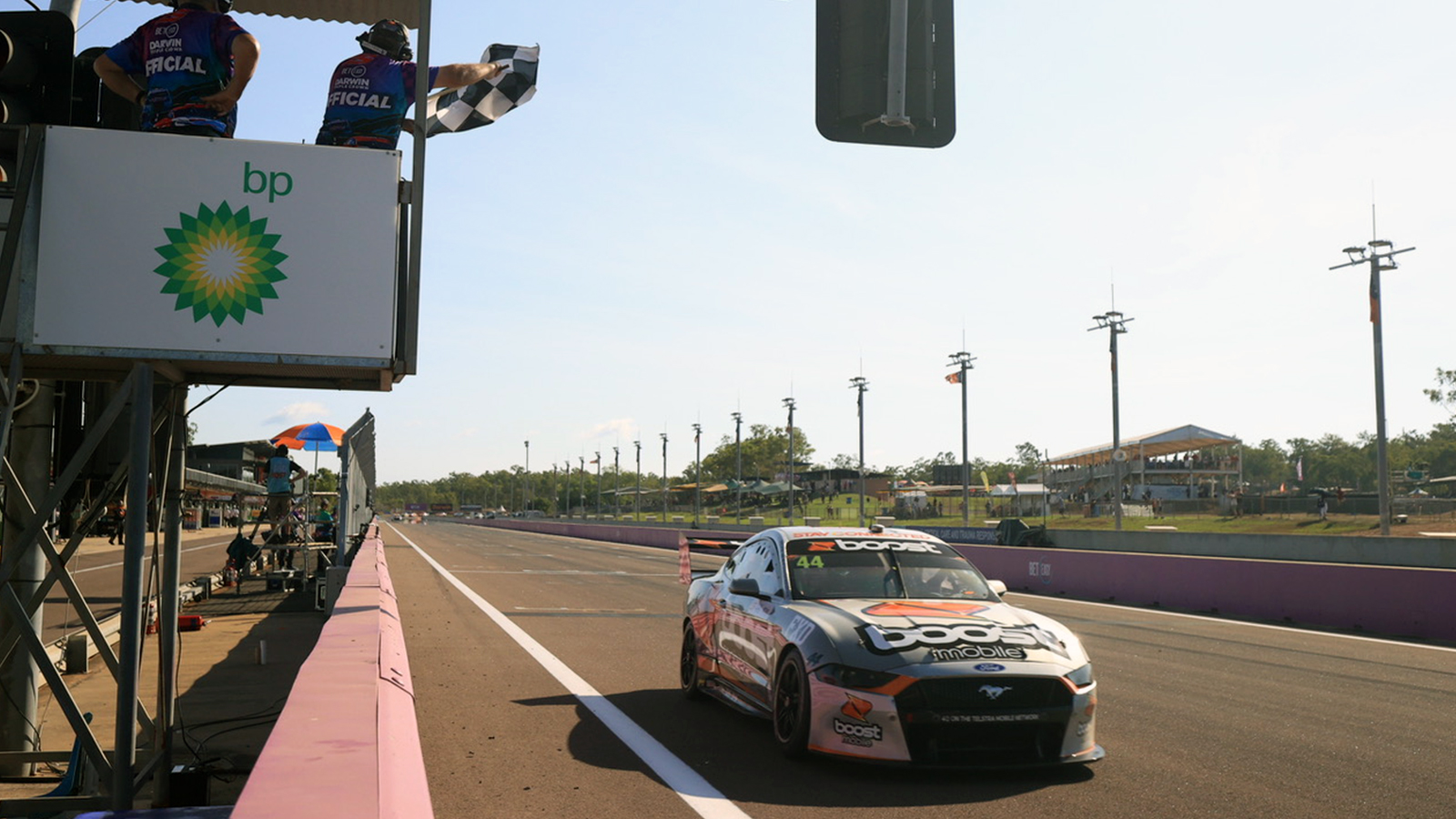 Tears are close, very close, as James Courtney rolls to a stop at the end of the first Supercars sprint in Darwin.

He is relieved and and almost euphoric after a close-run second place, his first podium in a Boost Mustang, and then he sees Riana Crehan.

As Will Davison’s wife moves in for the post-race interview, Courtney is conflicted and emotional.

“I was close to tears. I guess it shows that I’m still in love with racing,” Courtney tells Race News.

“Then I was looking at Riana, and I felt for them, and Will’s position. That’s what started it. I was choking up.

“I was happy for me, and for the Tickford team and Peter Adderton and Boost Mobile, but then I saw Riana and I know their dreams are shattered. At that moment I really felt for her and Will.”

The background to Courtney’s move to Tickford is well known, as he and his Boost backing picked up the slack when the Red23 program collapsed.

Now, with things improving rapidly for Courtney including the soft-tyre strategy that brings him home before Anton de Pasquale, a new-age driver is emerging.

Soon after the presentations he is with his #1 mechanic, Corey Walton, sharing the trophy and the joy.

“That was the best car I’ve had in a long time. I had good cars at Walkinshaw at times, and we had wins at the Clipsal 500 and on the Gold Coast, but the consistency and drivability is great in the Mustang.

But Darwin1 didn’t start that way, as Courtney put his ’stang in the barriers at The Valley.

“That was weird. The car was really loose. We changed the rear bar slightly, and as I turned-in it just snapped, really aggressively.

“I was lucky. It just broke the front bar, guard and headlight. We didn’t even need to tow it back.

“I’ve been upside-down in that corner before, so I was thankful that it only ended the way it did.”

Courtney was able to get back on track in qualifying, proof that he has turned a corner in his switch from a Holden to a Ford.

“I knew the car was pretty good. And I’ve got some experience on my side.

“We had a good showing in qualifying, and every time went out we were in the Top 15.”

The decision to go soft-soft in the race is the right one, as he runs close to the front and benefits from speed and mistakes by others.

“I was able to pick my way through. Then I was just banging out the laps. I think my fastest lap was the second-last, when I was trying to get around Anton.”

Once he has calmed down, but still beaming, he starts the calls and clearing the texts.

“I spoke to Pete (Adderton) and he’s over the moon. It’s a big relief and he’s taken a big risk, as much as I have, and we’re on this journey together. It’s a great feeling to be able to do it.

“I told him how much I appreciate what he’s done for me, and my family as well.”

There is also a risqué text from Alan Gow, his former manager, to bring him back to earth.

But Courtney is already busy thinking about the next move, and how to get the maximum from a Sunday that will be a hard-tyre grind.

“Everything is great. I’m really loving it,” Courtney says.

“I’m a realist, I know I haven’t got decades ahead of me, but I think today shows that I’ve still got it in me,” says the former Supercars champion, who just turned 40.

“I feel like I’m still 19 – until I look in the mirror. In my head, looking out, everything is the same as it’s always been.”