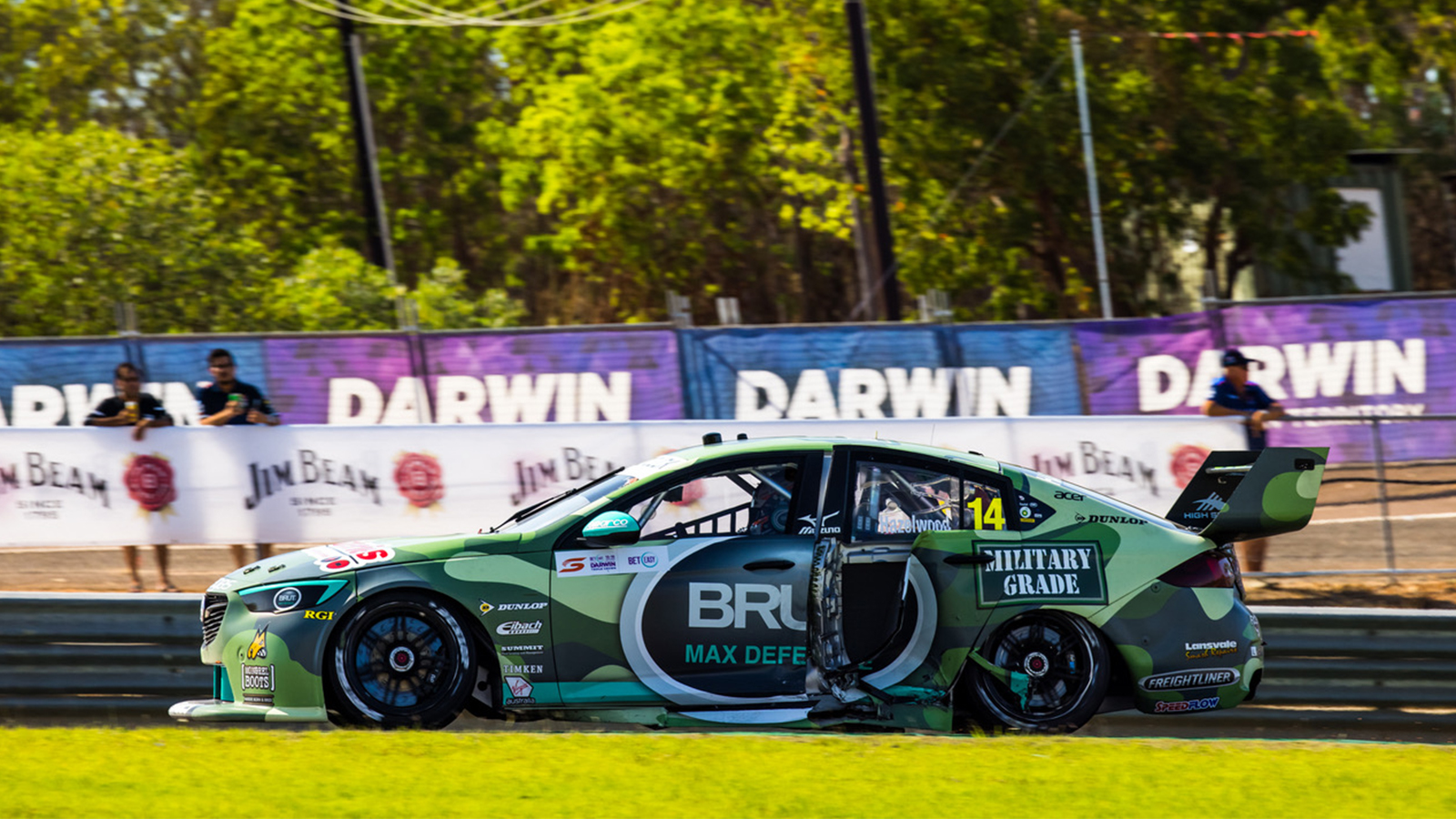 At 10pm last night the BJR garage at Hidden Valley looks like a panel beating shop.

Three damaged Supercars are stripped, with broken parts and panels everywhere, and receiving intensive care so they can return to racing for the Sunday sprints in the Top End.

It’s the end of a torrid day for Brad Jones Racing and one of the worst the boss can remember as he tucks into a toasted-cheese sandwich after returning to the team hotel in Darwin.

“I’m sure I’ve had days this bad. I just can’t remember when,” Jones tells Race News.

This day means crashes for Nick Percat, Todd Hazelwood and Macauley ‘Macca’ Jones, with only Jack Smith surviving the carnage as he brings his Holden Commodore to the flag in 12th after a late sprint on soft-compound Dunlop rubber.

Jones is a retired racer who had bad days of his own when he was driving, from the Thunderdome oval to Mount Panorama, but the smash-and-bash Saturday in Darwin is the last things he needs as he tries to steer his squad through the dark days of COVID-19, weeks away from home, tight budgets and limited crew and parts on the road.

“How do I feel? Sick. And frustrated.”

Jones knows how he feels about each of the incidents which have left him with a $100,000-plus repair bill, but he’s not playing the blame game. Even though Shane van Gisbergen was hit with a drive-through penalty after hitting Percat, who fired into the side of Hazelwood, and young Macca is deep in blame.

“Obviously everyone is regretful and apologetic when they have an accident. But it’s racing. You just had to look at each circumstance and learn from it.

He’s happier talking about the performance of Smith, who has polarised opinions in the pitlane in his rookie year.

“I think he had a good race, and putting the softs on at the last top was a good plan. He was my leading finisher,” Jones says.

But that was hours ago and now the race crew are flat-out on repairs, knowing they will have to bust the Supercars curfew to get the cars ready for Sunday.

“They are all beavering away and I’m hoping they don’t have too-late a night. And then we’ll be good to go again,” Jones says.

“We’ll have to break the curfew, for sure. I don’t think it’s an all-nighter, but there is a lot of work.

“We need to work through it and I’m sure we will. I hope Sunday will be a better day.”

Jones is reluctant to talk about the cost of the crash damage, but gets some relief from reporting no major chassis damage.

He is most concerned about the cost of repairs to the Percat car, which was loaded with brand-new parts for the hot weather races and is now surrounded by broken radiators and oil coolers and front suspension bits. The Hazelwood Commodore is getting surgery to its left-hand side.

“The side impacts are the worst. We’ve got some chassis damage on Todd’s car. The front of Nick’s car was all brand-new and it’s all rubbish now. I think Macca’s car is a bit more cosmetic.”

Thankfully, considering Darwin is so far from Albury and Townsville is just over the horizon, there is no shortage of parts of willing workers.

“We’ve got all the bits we need. Because we knew we had four or six races on the road we’ve been carrying extra stuff. But we know we’re going to have to get more stuff freighted in.”

While the crew are flat-out and focussed on the repairs, and presenting four immaculate cars on Sunday morning, Jones is trying to move on and planning logistics and tactics for a busy day with two more sprints.

“Yes, it’s frustrating. This is a pretty long road trip and we’re a long way from home. We’ve got a lot of damage we need to get sorted,” he says.

“But it’s just racing. It’s what happens. You have accidents, and you fix the cars, and then you go racing again.”