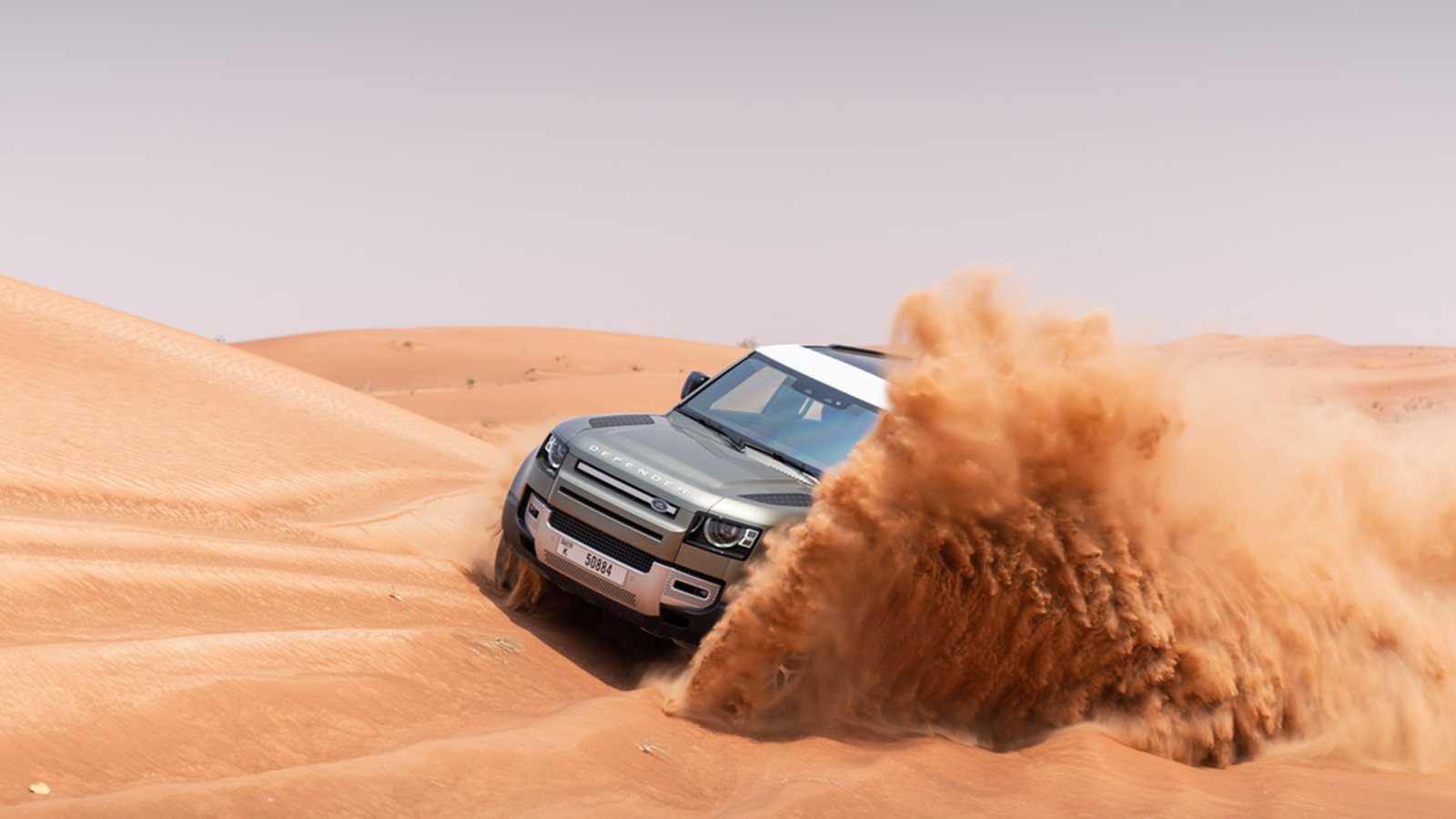 In the middle of an Arabian desert, north of Dubai, the temperature is nudging 54 degrees with 70 per cent humidity.

This is not a good time or place to be staring at a 360-degree horizon of drifting sand, but the car for the drive is very special.

It’s the all-new Land Rover Defender, the first of its kind in 72 years.

The all-new ‘Landie’ is coming soon to Australia, priced from just under $70,000, and there is already a giant waiting list.

Land Rover has taken a different approach to the renewal of its landmark off-roader, making it more suitable for the modern world with updated styling, a more-welcoming cabin and a major change from an old-school body-on-frame package to a car-style monocoque. It is also crammed full of modern electronics and safety equipment so it will do the school run while still being a highly capable off-roader.

The desert drive is an early preview ahead of Australian drives and sales in the near-ish future.

The only cars you normally see in the sand outside Dubai are camouflaged prototypes undergoing hot weather testing, so it’s fitting that we should now throw the 4×4 with the toughest reputation in the business into the fire.

Desert driving requires high revs and low speeds which is why this region is a prototype testing hotspot. It punishes the cooling system with the heat and lack of airflow from the slow-speed running, as well as the constant fear of sand blocking the radiators.

The aircon and insulation also cops a hammering as we surf the power-snow-soft dunes with stupid ease.

Riding on 20-inch alloys, tyre pressures are dropped to save rolling a tyre off the wheel, which can happen with a bit of dune surfing, and it’s time to go.

Straight away, the new Defender is, without question, better than the original in these conditions.

Slipping the familiar Terrain Response system into sand mode, the 85 ECUs go to work to almost guarantee you won’t get stuck. Not to say you won’t because we all do, but it makes even advanced dune driving relatively easy.

The Defender has two diesel engines, the D200 and D240, but our test car features the P400 petrol with its 3.0-litre, turbocharged, inline six-cylinder unit backed by an eight-speed, ZF auto transmission with dual-range 4×4. The transmission is standard across the range as is the electronic air suspension.

The base Defender gets steel wheels, fabric trim and analogue gauges, as the S upgrade adds part-leather trim, 18-inch alloys and digital dials.

The SE has 20-inch rims, powered seats and a camera in the rear-view mirror while the luxury HSE above that adds full leather and sunroof, while the range-topper X gets Meridian Surround Sound.

But back to the driving, where the Defender performs flawlessly in the sand and across some large boulders.

Given where we are, I cannot vouch for its claimed 900-millimetre wading depth in water, which is 400 more than the old Defender. Nor can I confirm that the electrical system can be submerged for up to an hour.

Just like its quirky and boxy exterior, there are more references to the old Defender inside including exposed screw heads on the door trim and aluminium kick panels, with a large centre storage area and the obligatory over-sized cupholders.

The infotainment system hooks up to the phone easily via Apple Carplay or Android Auto and the phone charges wirelessly off a charging pad in the centre.

The view through the rear-view mirror can either be cluttered by two or three rows of head rests and a spare wheel, or unobstructed thanks to a rear-mounted camera that can be viewed through the mirror.

With seats in place, there’s 231 litres of cargo space whereas folded flat, it balloons out to 2233 litres.

While it’s obvious there will be comparisons made to the Jeep Wrangler and Gladiator for its utilitarian capabilities, the Ford Bronco for who does retro best, and even the copycat Grenadier, the new Defender is not trying to be the old one.

The 21st century Defender is now impressive on the road in a way that the original could be, and still has all the off-road ability you could possibly need.