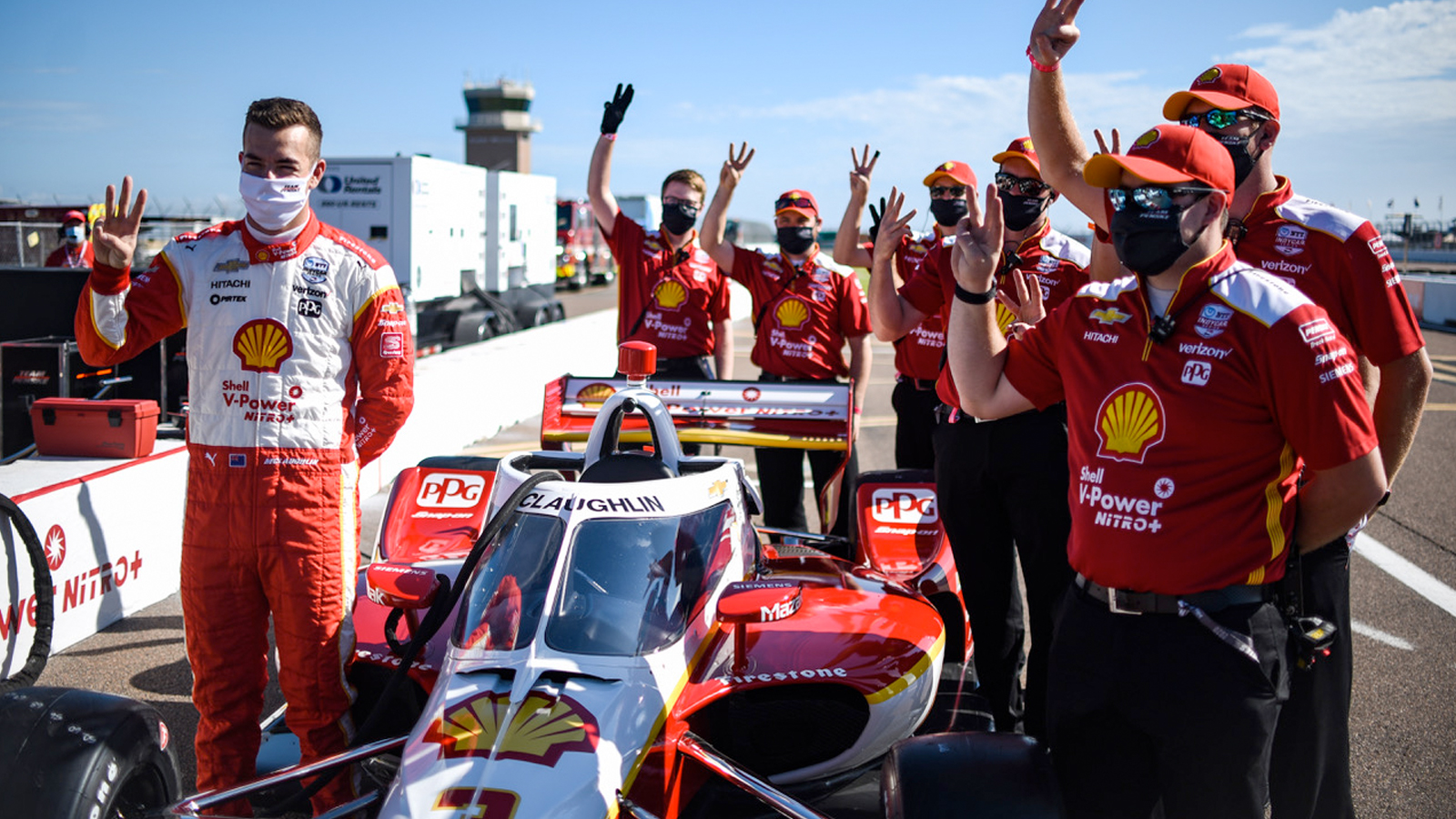 Thanks to Google, YouTube and a not inconsiderable number of bloggers, a lot more people in the USA now know who the hell Scott McLaughlin is.

It wasn’t exactly an internet frenzy over the last week or so, but Scott McLaughlin was a name pretty heavily searched by US racing fans trying to get a handle on the new boy in the revered ranks of IndyCar racers at Team Penske.

Now he is heading into his Rookie Orientation at The Speedway, to begin his preparations for his first Indianapolis 500 start next year, and the hits will keep on coming.

So, why did The Captain pull an Australian-based New Zealander out of something he obviously does particularly well and stick him in a series which is arguably the closest and most competitive open-wheel category on earth?

This is a guy who could buy one ticket and win all three meat trays at the local pub on a Friday night.

He is a likeable, smiling, friendly and – importantly to Penske – respectful human being who is immensely thankful for everything that comes his way rather than believing it’s all deserved.

Roger Penske likes Scott McLaughlin a lot. And having The Captain as a fan doesn’t hurt a racing driver’s career.

Look at what he’s done over the years in IndyCars, without worrying about NASCAR or sports cars or Formula One.

Penske sees McLaughlin as the next Big Thing, enough of a talent to add a fourth car to his usual three Chevrolet-powered Dallara armada of entries for the 2021 season.

But while McLaughlin is the ‘new guy” in town, he’s not completely unknown in the USA. A lot of people watch Supercars in the land of the free, home of the brave.

Not big in the scope of the vastness of the American continent, but big when viewed from itty bitty Australia.

Supercars actually broke through in larger-than-expected numbers in 2018 when Andretti Autosport superstar and Canada’s beloved IndyCar star James “the mayor of Hinchtown” Hinchcliffe shared a WAU ZB Commodore with Alexander Rossi in a wildcard entry for the Bathurst 1000.

I’d like to say the IndyCar blow-ins didn’t get their highly regarded arses kicked, but, well, I can’t.

They did indeed get their highly-regarded arses kicked black-and-blue by the take-no-prisoner locals and, if one were to put a silver lining on it all, drove far more rapidly than the usual overseas tourists and thankfully didn’t stop to take selfies during the race.

But the biggest upside was that motor racing fans in the US tuned-in en-mass to watch, giving our Down Under-centric series a loyal if rather small footprint.

One YouTuber was eager to point out that McLaughlin comes from “the most competitive sedan series in the world”.

A nice sentiment but one, you have to suspect, was also a shot at the often-criticised NASCAR series.

To the open-wheel aficionado, driving undercover is simply wrong.

Wheels enclosed by fenders and something to keep the rain from pit, pit, pattering upon the top of the helmet is like spending time at the day spa compared to the real men who do what they do all out in the open.

And they’re really quite, well, roofless about it.

But now McLaughlin is about to stare down the ‘Beast’, as his baby-steps towards a long term Indycar journey gets seriously serious at greatest place of pace on planet Earth.

Starting on Thursday morning, McLaughlin will be testing with Team Penske at the daunting 4.0-kilometre Indianapolis Motor Speedway. The two-day test will also be his Rookie Orientation for the 2021 Indy 500, which may or may not be run in May next year.

McLaughlin should be somewhat overawed when he first stands on pit straight at IMS. I’ve been there and just standing on the front straightaway is mind scrambling. In typical American style, it’s a motor racing venue, but super-sized.

The concrete lined 2.9km St. Petersburg street circuit in Florida where Scott made his race debut last weekend is tighter than Donald Trump’s grip on his tax returns, whereas the IMS is bigger than Texas. Sure, it’s in Indianapolis, but you get the point.

Related Article
The Power of One

It’s so big there’s an 18-hole golf course, a museum, a road course and lord-only-knows whatever other stuff fitted easily in the infield. Plus space for a lot of often inebriated spectators as well. I know this because I once was one.

No-one in their right mind would build something so goddam big these days, but back in 1909 the land in Indianapolis was obviously cheap.

The transition from St. Pete to Indy is like racing at a go-kart track one day and then tackling Mt Panorama the next.

The 27-year-old Kiwi will have to run a set number of laps at ever increasing speeds to prove that he deserves a place in the field for what is arguably the greatest race in the world.

If he wants to be competitive in the Indy 500, McLaughlin will have to work his way up to lapping in the 360km/h neighbourhood.

To put that into a perspective that would make anyone’s testicles abandon ship, that’s the length of a rugby league field every 3.5 TENTHS of a second.

Put a lump of coal between your butt-cheeks and at that speed you’ll end up with a diamond.

McLaughlin will at least have some top-shelf Indy brains to pick, with his Team Penske team-mate, 2019 championship winner and 2020 runner-up Josef Newgarden also consigned to testing duties. And, probably best of all, Penske’s driver coach, the legendary Rick Mears, will be on hand to whisper quietly into the rookie’s ear.

What Mears doesn’t know about the IMS isn’t worth bothering with. He’s win the ‘500 four times. Started from pole position six times.

As humble and likeable as anyone you’d ever meet, the fact is that when Mears speaks it’s best to shut the hell up and listen. And McLaughlin will listen, for he is a smart enough racer to know what he doesn’t know and file away any snippet of info that can shave time off a lap.

It seems that New Zealand produces a lot more than just hobbits and legs of lamb.

McLaughlin, now the winningest driver in Penske history after supplanting Roger Penske’s revered and still sorely missed Mark Donohue, has captured his respect, admiration and desire to see just where this journey could take a youthful Kiwi and arguably the greatest and most professional motor racing team on the planet.

Gushing with wide-eyed wonder, McLaughlin described his IndyCar race debut as the “best day of his life”, apart from his wedding day. Obviously.

In one sentence he managed to show just what all this meant to him as a professional racer and still ensure his man-parts remained intact when he arrived home that night. It was a wise political move on both counts.

If nothing else, St Pete showed that McLaughlin has some learnin’ to do. He was a class act on the harder of the two Firestone compounds, the ‘blacks’, during the one and only 90 minute practice session, finishing an admirable tenth on the timing charts.

However when switched to the softer ‘reds’ for qualifying he discovered, as most rookies usually do, a problem translating the confidence of all that extra grip into a big jump in pace.

For sure it wasn’t the headline grabbing performance in finishing third in the opening pre-season Indycar test in Texas at the beginning of a Covid-mangled 2020 season, but while he was back Down Under winning his third straight championship under a tin roof his rivals were putting in the hard yards in a very roofless series.

That lack of Indycar match fitness and an inability to come to grips, so to speak, with qualifying rubber should be a lesson learned and will, quite obviously, be brushed aside as the laps start banking up and the Penske brains trust do what they do best.

And as they’ve shown over the decades, that’s pretty damn good.