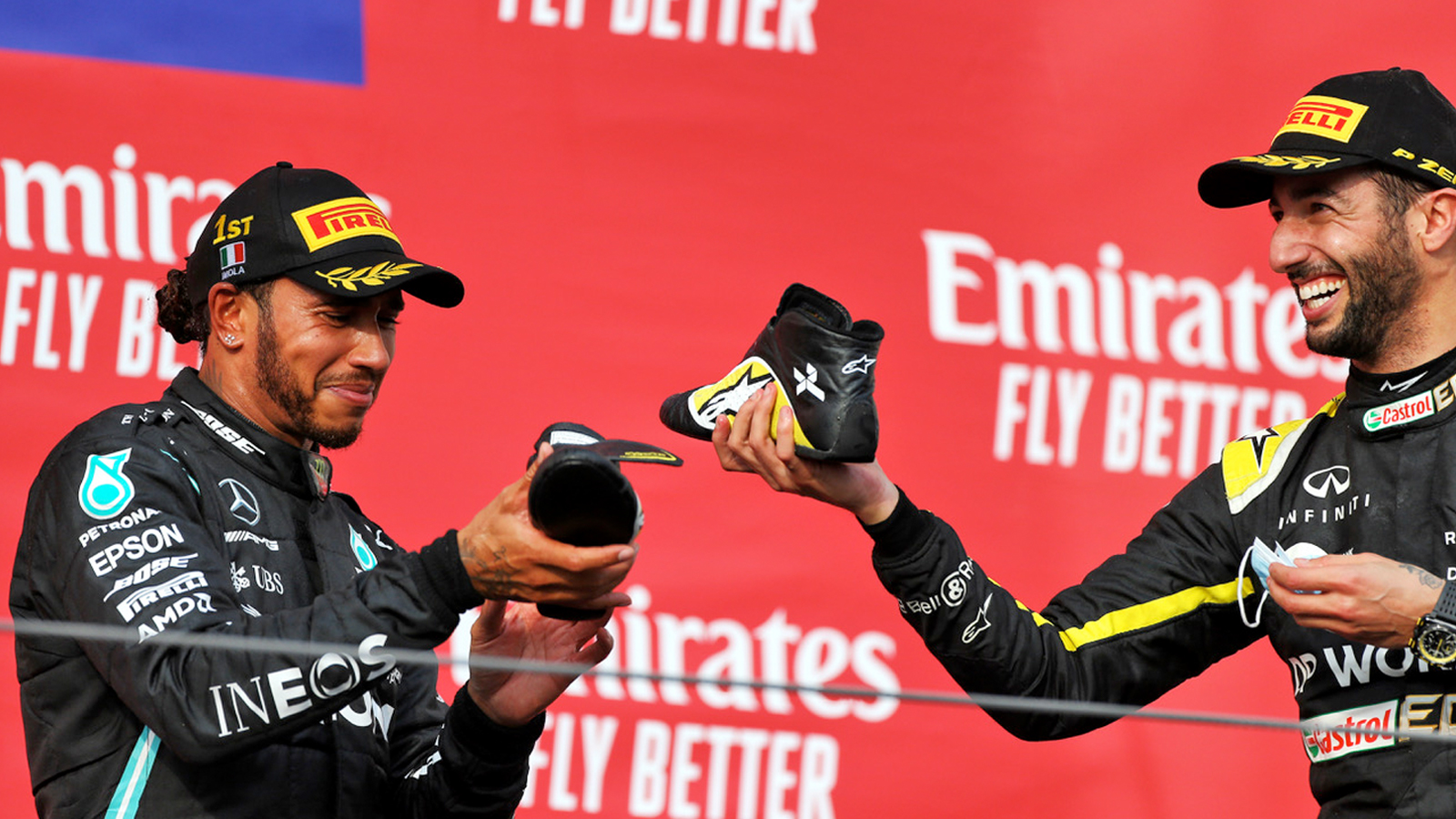 Daniel Ricciardo triggered a podium party at Imola despite another predictable 1-2 finish for Mercedes.

As the black arrows celebrated their seventh consecutive constructors’ championship, and Lewis Hamilton nabbed another win on the way to a record-equalling seventh drivers’ title, it was third-placed Aussie Dan who provided the excitement.

There was no crowd to cheer after fresh Covid-19 lockdowns in Italy, but as Ricciardo went for his trademark ’shoey’ after the Emilia-Romagna Grand Prix he got Hamilton to play along.

Third was as good as a win under the current Mercedes-AMG domination, and also lifted Renault to third in the teams’ championship, as Ricciardo counts down to his switch to McLaren for the 2021 season.

“Two podiums in three races. I’m very happy and I didn’t forget to do the ‘shoey’ this time around,” said Ricciardo.

“I’m super happy to come away from Imola with a great podium: big thanks for everyone at the team.”

Valtteri Bottas could and should have won the race after starting from pole and leading, but when he ran over debris he surrendered the race lead as Max Verstappen of Red Bull moved into contention.

But he lost his shot with a late puncture and the Mercedes pair rattled back to the front and the 100th win of the hybrid era.

“I was actually having a lot of fun and then suddenly on the straight I lost the car because of some sort of tyre failure, so it’s a big shame because it would’ve been very nice to have second place and another podium,” said Verstappen.

The race produced all sorts of records for Mercedes, including the 100th victory under team boss Toto Wolff, and Hamilton said all the right things.

“This team keeps pushing and raising the bar and it’s inspiring to work with such a dedicated and driven group,” he said.

Danil Kyvat was a surprising fourth for AlphaTauri as Charles Leclerc came home in fifth for Ferrari, as the team slowly makes forward progress despite another dismal day for Sebastian Vettel in 12th.
“I think we did the maximum,” said Leclerc.

“I was really pushing from the beginning to the end and I feel we were quite competitive during the whole race. Also, we did a good job in managing our tyres.”

But no-one was happier than Ricciardo, even if there will be no double-up on the tattoo that team boss Cyril Abetiboul earned with the team’s first podium.

“We were pretty settled in fifth but then Max triggered the safety car. It was the right thing to stay out, especially after Perez pitted,” Ricciardo said.

“It is pretty difficult to overtake here and it was worth the risk today: it paid off. No second tattoo this time round though, I think Cyril’s suffered enough.”