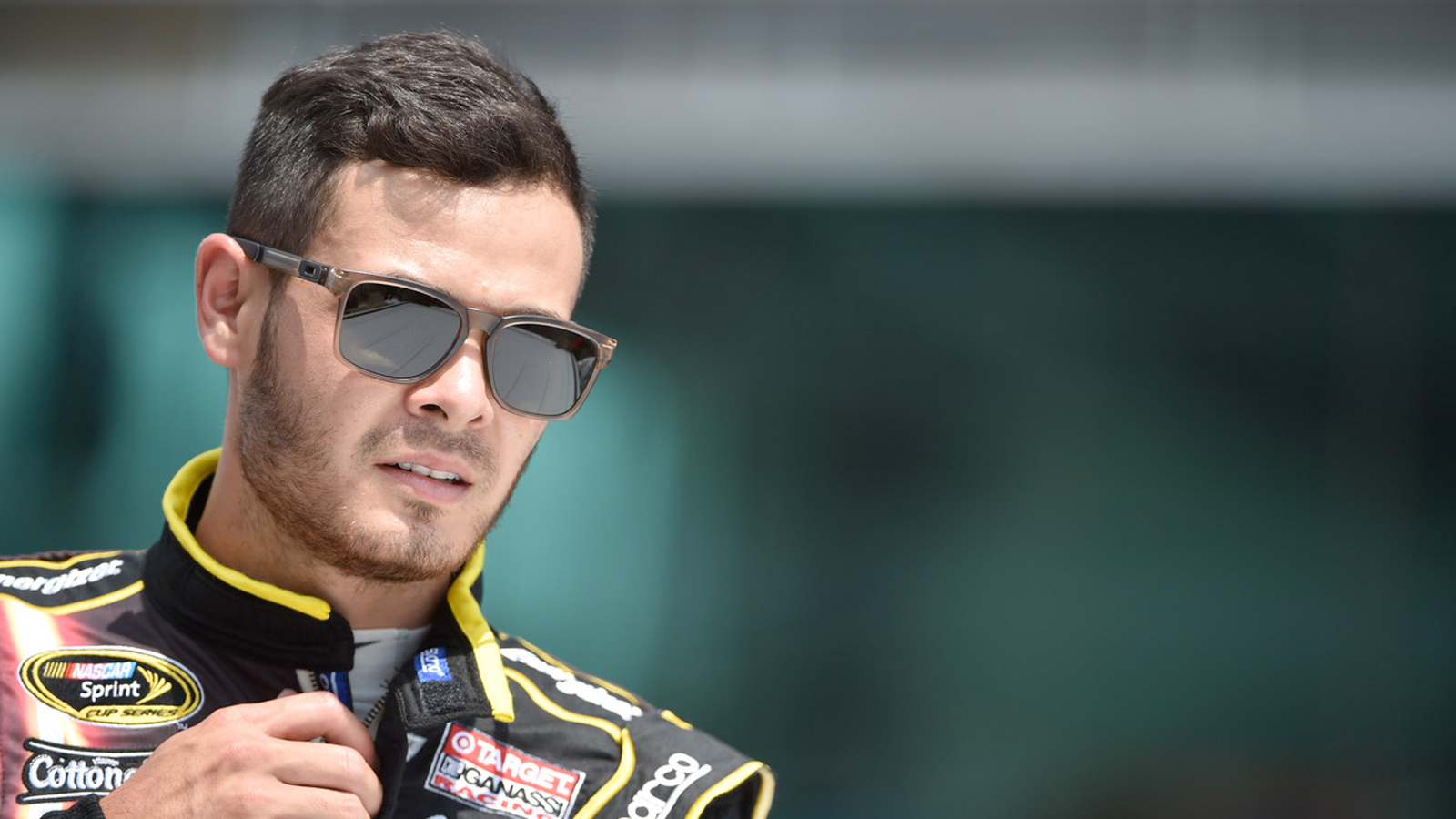 It took roughly two seconds for Kyle Larson to almost destroy his life.

In April this year, the prodigiously-talented 27-year-old NASCAR star-in-the-making made the greatest mistake of his life, one that most of us could have made but without the same career-changing consequences.

You see, Larson, the Rookie of the Year in the 2014 Cup series, engaged his mouth before his brain was locked in gear.

Just four races into the 2020 NASCAR season, the on-track action was on hold because of Mr Covid-19 and, like many other drivers, Larson was using his physical racing down-time to go racing online on his sim-set at home.

On April 12, 2020, he was happily contesting an iRacing event when his computer burped, farted and all communications went down.

I’ll admit that when my computer has one of its regular nervous breakdowns, I enter a kind of puce-faced rage that produces the kind of profanity which would have me forever banned from even impolite society.

That’s not to say I agree even remotely what Larson said, but . . .

Well, who amongst us hasn’t wanted to treat our computer to acts of unnatural cruelty when a day’s work suddenly disappears into the ‘Where-the-f*&# did it go?’ miasma?

Serial killers have been created from less.

But an obviously exasperated Larson expressed his frustration with the following.

“You can’t hear me?,” he groaned. “Hey … ” he continued, using the most offensive word in the USA.

It seems that they could hear him, even if he could not hear them, and pretty soon afterwards it all hit The Fan. Big Time.

A high-profile NASCAR driver using ’that word’ was, well . . . light the wick and stand back for launch.

That thundering noise in the background was the sound of corporate feet fleeing the scene, as major sponsors such as McDonalds, Coca-Cola and Chevrolet were making themselves scarce.

They say that giant companies are often slow to react, but Larson’s words had hardly left his lips when these backers, and quite a few others, were putting Usain Bolt to shame in terms of outright pace to depart the vicinity.

Larson’s then boss, legendary team-owner Chip Ganassi, was left with no choice but to show him the door while NASCAR told him to tell his story while walkin’ and not to let the door hit him on his butt on the way out.

To gain any sort of redemption he was told he would have to undergo sensitivity training and tour the US, speaking with and listening to various ethnic groups, to better understand the vagaries of life and basically kick himself in that butt for the satisfaction of all involved.

While NASCAR kept him on the sideline, Larson could, at least, race for his own World of Outlaws sprintcar team and then, when the time was right, apply for reinstatement to the big league.

Over recent months, with little else to do, Larson has been back on the dirt-track speedway circuit, mostly in fearsome winged sprint cars.

His resume? He has scored 42 wins in 82 dirt races, 23 of which have come in the cut-throat World of Outlaws series.

But now, finally, it has been announced that Larson can come back to NASCAR, a lot beaten, maybe a little bowed, but just as talented.

Tony Stewart, from Stewart-Haas Racing, said a few nice things but in the end it was NASCAR heavyweight Rick Hendricks that did the multi-year deal to put him back in a Cup car.

“I’m very thankful that I’ve gotten a second chance, and I’m going to make the most of it,” gushed Larson.

“Kyle is unquestionably one of the most talented race-car drivers in the world,” said Rick Hendrick. “I’m confident about what’s in his heart and his desire to be a champion in all aspects of his life and career. Kyle has done important work over the past six months, and Hendrick Motorsports is going to support those continued efforts.”

So, is Kyle Larson a racist or just dumb? He may not like the choice, but let’s go with the latter for a few good reasons.

To paraphrase the unforgettable Monty Python movie classic ‘The Life of Brian’, “he’s not a racist, he’s just a naughty boy”.

Larson knows the harsh realities of racial inequality, or maybe racial profiling is more appropriate, better than most.

During World War II his grandparents were placed in a Japanese internment camp in the US. His mother is a Japanese-American and his middle name, Miyata, is a nod towards his Asian roots. And no, it has nothing to do with the US badge for the Mazda MX-5, but it’s still kinda neat.

He was touted as the Generation-Y version of another California-born NASCAR superstar, Hall of Famer and four-time champ, Jeff Gordon.

Note that Gordon was also a Hendrick driver.

Now, in the past, the average NASCAR race used to look like a casting call for a Dukes of Hazzard remake.

NASCAR was anything but an inclusive place.

Way back in 1990 I had the opportunity to interview Willy T. Ribbs, the first black driver in IndyCar who was also, at one stage, touted as a potential Formula One starter. He has recently starred in a video movie of his life and career.

At the time, Ribbs was finding it tough to find sponsors to fund his IndyCar campaign and I mused, obviously being a rather clueless visitor from Australia, that maybe he could consider a switch to NASCAR.

Willy T’s eyed widened sightly and his forced smile gave every indication that he considered me about as dumb a fool as he had ever had the misfortune to encounter.

“Man, the only nigger you’ll ever see at a NSACAR race is the guy serving the roast beef in the hospitality tent,” he laughed.

In recent times, faced with a declining fan base because of the somewhat (to them) bewildering vilification of white supremacists, NASCAR wants to be all things to all people, especially if you’re a high earner under 40 who thinks that the ethnic diversification of categories such as IndyCar is, well, “interesting”.

Like Donald Trump, NASCAR enjoys a robust and rusted-on fan base, largely consisting of non-college-educated white males hailing from somewhere below the Mason-Dixon line.

But to grow, thrive, attract big corporate sponsors and remain relevant in the battle for spectator eyes against the likes of the NBA (basketball), NFL (football) and MLB (baseball), NASCAR’s vilification of Kyle Larson was not just dumb but…

Despite throwing its hands up in horror at Larson’s comments, it’s worth noting that the touchy-feely, new-age NASCAR regime didn’t think it was necessary to ban the Confederate flag – the ultimate symbol of the north-versus-south Civil War over slavery issue in the USA – until JUNE this year.

If ever there was a more divisive symbol of the rift between black and white in America, the Confederate flag is it. Well, aside from a nice white sheet with eyeholes.

If you look at the various NASCAR websites, you’ll find out that William Darrell ‘Bubba’ Wallace is “one of the most successful” African-American drivers in the history of NASCAR. It’s probably true as I simply can’t remember another.

And black drivers in NASCAR should be remembered.

Earlier this year Bubba’s team discovered a rope ’noose’ hanging in his garage at the awesome Talladega Super Speedway down in ‘baccy chewin’n’spittin’ country, Alabama, where necks only come in one (red) colour.

An FBI investigation showed that all of the garages had pulldown ropes on the roller-shutter doors but only Wallace’s was tied like a noose, although they couldn’t say definitely that Bubba was a target and it was eventually proven that it had been there for some time.

Even the “least racial person you’ll ever meet”, US president Donald Trump, leapt into the fray, demanding that Wallace apologise for the “hoax” investigation and that the banning of the Confederate flag had delivered NASCAR its lowest TV rating ever.

Oddly enough, and you really shouldn’t be surprised here, the TV broadcasters said that the ratings were eight per cent better than ever.

Back in 2014, NASCAR supremo Bill France wanted to ban the Confederate flag. His board of directors said no because it would alienate the core supporters. This from many of the same people who despised Kyle Larson’s comments.

Shame on you guys. Shame!

Bubba lobbied for NASCAR to ban the Confederate flag once and for all and, mindful of a new world order facing them, that’s just what they did.

Yet, still Kyle Larson was banned. But now, well, at least soon, he’ll be back.

He will have a new team, new car and Chevrolet power. No sponsors yet, but they will come.

“Once we start next season, I’ll have raced close to a 100 times this year,” Larson said.

“That’s by far more than anybody else has this season. I feel like I’m still as sharp as ever, if not sharper. We’ll see, but I’m definitely feeling good about it going into next year.”

But it was so nearly the end of it all. Belly-up and dreams destroyed. And yet?

Maybe Larson himself best explains it all.

And maybe it’s time for an indigenous Supercar driver to complete things Down Under as well.

But that’s a discussion for another day.