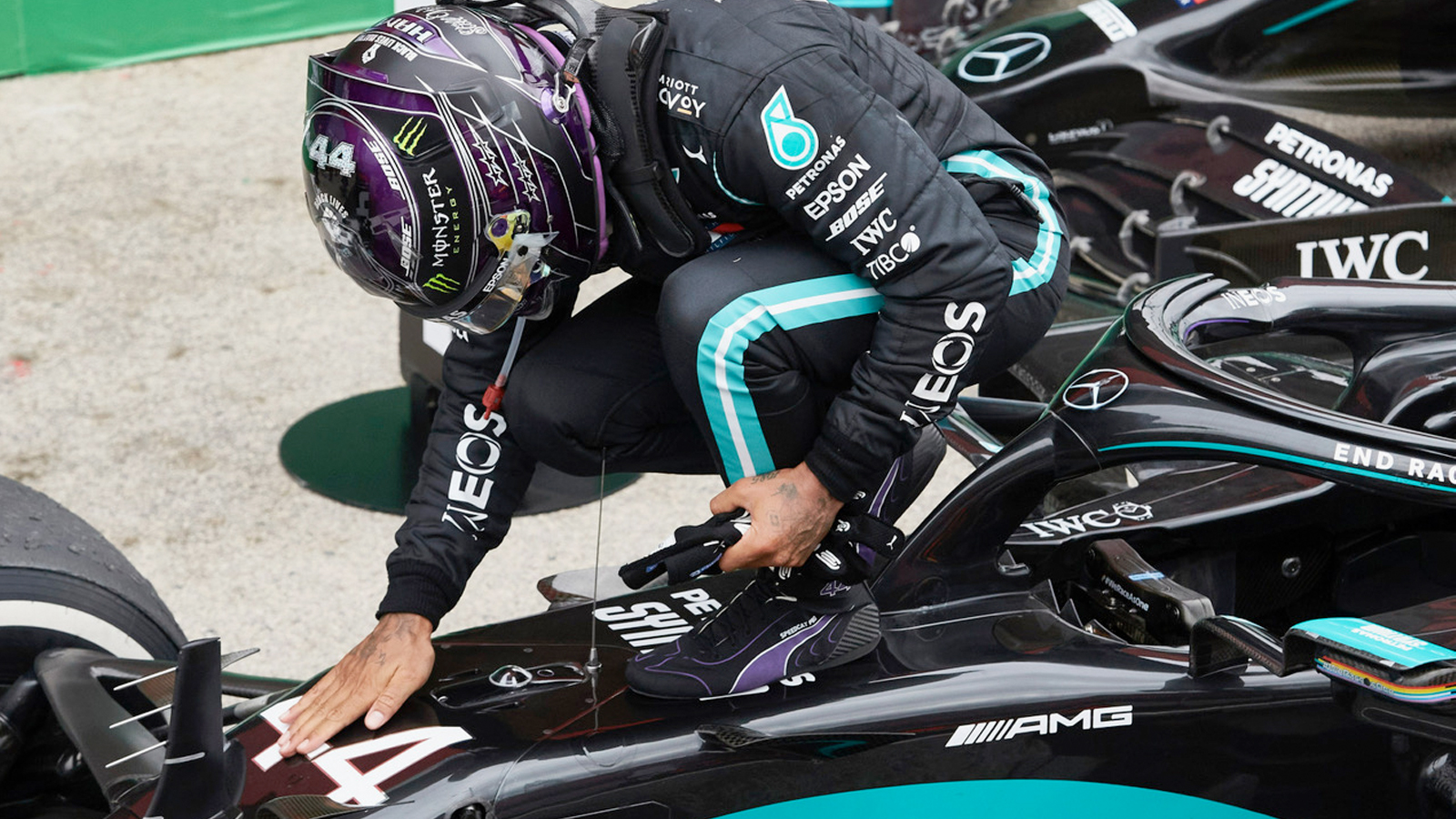 Now that Lewis Hamilton has equalled Michael Schumacher’s record with seven world championships the big question is when he will become a Knight.

Sir Lewis would be only the fourth Formula One driver to receive the honour, after Jackie Stewart, Stirling Moss and Australia’s own Jack Brabham.

There are plenty of people in and around grand prix racing who have been knighted, from Frank Williams and Patrick Head to part-time touring car competitor and cycling superstar Chris Hoy, but just as many who have missed out.

John Surtees, the only man to win world titles on two and four wheels, never received a Knighthood. Neither have Nigel Mansell or Damon Hill, Britain’s most-recent world champions.

There is a rather starry-eyed, but quite widespread, that the Queen of England actually sits down at Buckingham Palace and picks her Knights.

But, in reality, it is a complex bureaucratic process.

There are thousands of nominations every year and a body called the Honours Committee, which comes under the control of Britain’s Cabinet Office, trawls through them. There are no fewer than 11 sub-committees covering different activities such as sports, arts, education, political service and more that decide which candidates will be sent forward to the Honours Committee.

All nominations must come with at least two letters of support from people with a first-hand knowledge of the person. If, after two years, the nominee has not been successful, one can assume that the nomination has failed.

The British honours system seems complicated, but it is basically a ladder involving membership of the Most Excellent Order of the British Empire (outdated though the name may be).

The next step up is the Knight Bachelor, which means you become known as Sir.

A Knighthood goes back to medieval times and was originally given by the King (or Queen) for great service in battle. It was conferred with a tap on each shoulder with a sword.

That still happens, but the sovereign – currently Queen Elizabeth II – does what they are told to do on recipients.

It is generally agreed that the first person to be recognised for sporting achievement was Francis Lacey, the Secretary of the Marylebone Cricket Club, who was knighted in 1927.

It would be more than 20 years before the first actual participants were recognised through cricketers Jack Hobbs and Len Hutton and the jockey Gordon Richards in the 1950s. It was not until 1965 that the first soccer player, Sir Stanley Matthews, was knighted.

In motorsport, there were Henry Segrave and Malcolm Campbell, who were knighted in 1929 and 1935 respectively, but that was not for their motor racing achievements but rather because of their Land Speed Records which drew attention to Britain’s engineering industry.

The first man to win an honour for simply driving grand prix cars was Jim Clark, who was appointed an OBE in recognition of his first world championship in 1963.

There have been 10 British Formula 1 World Champions, who have won 20 titles between them, and all but three have received some recognition for their achievement.

The first driver not to be recognised was Britain’s first champion, Mike Hawthorn, in 1958. He might have been given an award but awards are not made posthumously and he died in a road accident a few months after winning his title.

The second omission was John Surtees, and this was probably due to bureaucratic logic that suggested that it was too soon after he was awarded an MBE for winning the motorcycle World Championship. James Hunt was the third omission, probably because of his “bad boy” image in the stuffy 1970s.

Lewis Hamilton was appointed an MBE after he won his first world championship in 2008, which was odd because previously all World Champions were OBEs.

Graham Hill was given an OBE after his second world title and Stewart got one between his first two titles.

Nigel Mansell was an OBE after his title year and Damon Hill followed suit.

But Hamilton was given only an inferior MBE after he and Jenson Button got the same honour in 2009. It seemed that winning the World Championship was not considered as important as it once had been, which was strange.

While foreigners cannot win such awards there are occasional honorary appointments, notably an OBE for Frenchman Alain Prost in 1994.

The first team boss to be recognised was Lotus’s Colin Chapman, who was appointed a CBE in recognition for his motorsport and car industry achievements.

In the 1970s someone in the corridors of power decided that Raymond Mays, the man who had run F1 teams ERA in the 1930s and then BRM in the 1950s, deserved recognition and he was awarded a CBE.

A year later Roger Clark became the first rally driver to be honoured with an MBE.

The first award to a motor racing supplier went to Cosworth’s Keith Duckworth in 1984, although the Ford Motor Company’s Walter Hayes, who was the force behind the Cosworth DFV engine, had been appointed a CBE two years earlier, “for services to the motor industry.”

The awards in 1986 recognised the first non-F1 racing driver with Derek Bell MBE, a multiple winner of Le Mans. He has been followed over the years by IndyCar driver Dario Franchitti, who was given an MBE for his four IndyCar titles and three Indy 500 wins, and three-time World Touring Car Champion Andy Priaulx MBE.

Over the years, there has been a CBE for March Engineering’s Robin Herd as recognition for the company’s impact on the motorsport industry in Britain. He would be followed by Eric Broadley of Lola and John Cooper of Cooper Cars.

And then in 1996 BBC commentator Murray Walker became the first member of the motor racing media to receive an OBE, while in the same era Bill Boddy of Motorsport magazine was appointed an MBE.

In 2002 there was a much-deserved OBE for Professor Sid Watkins for his extraordinary work in motorsport safety.

In recent years Claire Williams and Susie Wolff have been appointed OBE and MBE respectively, presumably to encourage female involvement in the sport.

This means that Claire has received more recognition by the British Royalty than Hamilton. Go figure.

In 1999, Frank Williams became the first team owner to be knighted, and a year later Ron Dennis of McLaren was honoured with a CBE.

There are a lot of glaring examples of people who never got the recognition they perhaps deserved, including Dennis who might have been knighted for his success in F1 and also for making McLaren a leading supercar company.

There is also John Barnard, who designed McLarens and Ferraris that won a string of World Championships in the 1980s but ehas never received any recognition, and Peter Wright, a major figure in F1 as a ground-breaking engineer, team owner, and an important a safety engineer with the FIA.

There have been awards for Adrian Newey, Ross Brawn and Christian Horner, but it is still a most inconsistent system.

It might be controversial to recognise Max Mosley’s work at the FIA and Bernie Ecclestone’s activities with the Formula One group, but thus far there has been no hint of such things.

As for Hamilton, we’re still waiting.