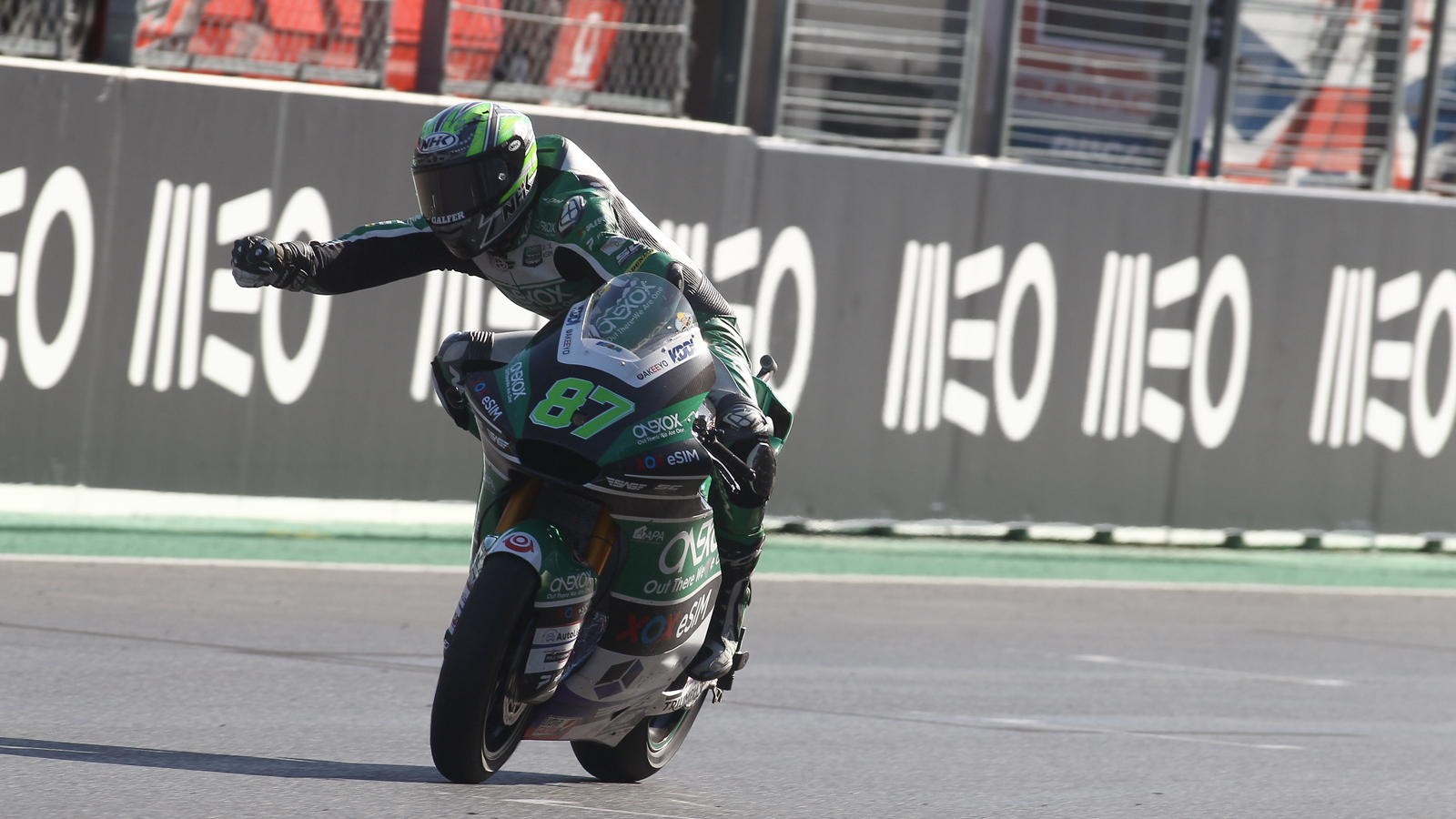 Remy Gardner has completed the perfect graduation to Red Bull KTM in 2021 with an emphatic victory in the last Moto2 race of the season.

After a turbulent year for the youngster that included a broken finger, he was unbeatable at the Portimau circuit in Spain.

Gardner qualified on pole position but was jumped at the start, then fought straight back and eventually scored his maiden MotoGP win with a 1.6-second margin for the ONEXOX TKKR SAG Team.

“My first ever win. We came to a track I really love and we managed to win,” Gardner said.

“I still don’t have words, I’m still on cloud nine at the moment – it still needs to sink in.”

Gardner’s father Wayne, the 1987 500cc world champion, was watching the race in Australia during a business trip from his home in Monaco and told Race News that the victory was no surprise to him.

“It’s relief, more than anything. I know he’s an exceptional talent, and I’ve known that for a long time. It’s been a long, expensive and hard journey to get him to that speed. But he’s on his way now.”

Gardner’s victory was also celebrated on Facebook by his mother, Toni, who lives in Greece.

“I was sobbing with happiness for him in the last two laps, and when the Australian National Anthem was playing on the podium. Amazing,”she posted.

Gardner’s first MotoGP win comes after some tough times, as he has shown exceptional speed but also – a lot like his father – also been prone to crashing.

“I think a lot of the accidents have been caused by frustration. He hasn’t had the experience,” Wayne said.

“If there’s one thing that Remy has had in bundles it’s been speed. But he’s been too fast for his experience. It’s been about getting the experience to match his talent. He’s been going way too fast for the equipment and the team he is with.”

Gardner has been coaching his son since the start, as he did for his brother Luca before he turned to DJ work and then building and property development back in Wollongong.

“I told him ‘The fastest guy doesn’t win, it’s the smartest’. And that seems to have settled in,” Wayne said.

Although there is some talk that Gardner could jump to MotoGP next year, his father believes the Red Bull KTM promotion will be good for him as he tries to win a world title.

“The good thing he’s now in a good team. And he will be very strong from next year in his MotoGP career.”

As he celebrated the victory in Spain, close to where he is based in Barcelona, Remy was happy to have made the essential breakthrough.

“I’ve had a few tough years in Moto3 and Moto2, I’ve had a few podiums this year and last year, but the win has always eluded us. I worked on myself really hard last winter and this year as well.

“Extremely happy, a great way to end the season and hopefully this is a glimpse of what’s to come next year,” he said.

While Gardner was celebrating his win in Spain, Australia’s Jack Miller was also pumped to take second place at Portimao.

“Bloody wild day for us,” he posted to social media.

“Final MotoGP for me at the Pramac Racing team and we managed to bring home some silverware. Hard to top that for the boys really, the only thing that could was that top step.

“Two second places in seven days was just about a perfect way to say goodbye to Pramac Racing.”