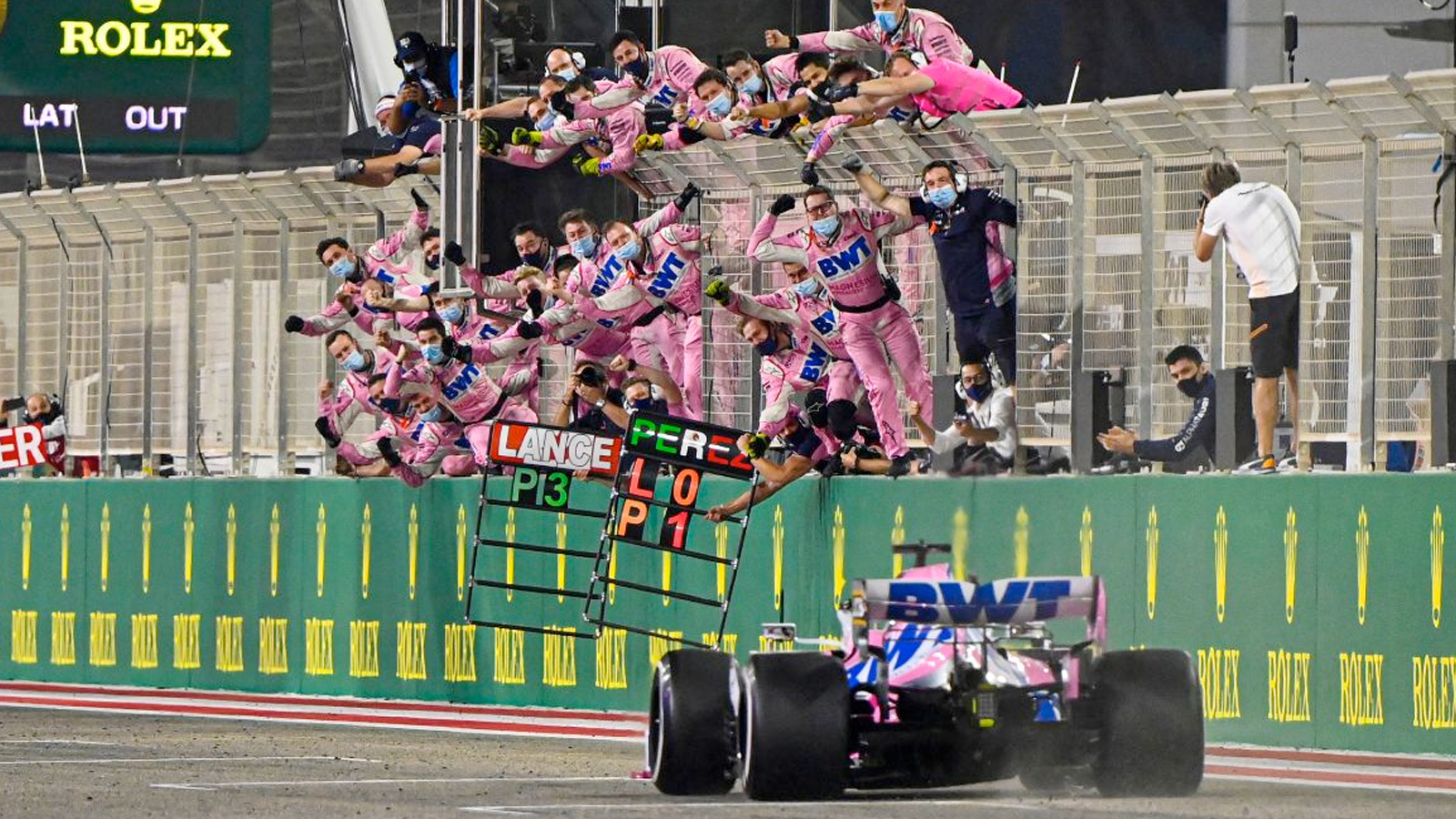 As the newly-crowned world champion stayed away from Bahrain with Covid-19 his Mercedes-AMG team imploded.

What should have been a regulation 1-2 finish for Valtteri Bottas and speedy fill-in George Russell turned into the worst race for the Black Arrows since the debacle at the German GP in 2019 when a 125th anniversary celebration turned into race to forget.

Luckily there were Pink Arrows in Bahrain and the copycat Benzes of Sergio Perez and Lance Stroll scored big with a 1-3 finish as Esteban Ocon, who has looked second-rate all year alongside Daniel Ricciardo at Renault, finally got a break and second place.

“Luck or not, we had a tremendous race today and we won on merit. I was crying behind the wheel and speechless for a while but it’s an incredible result for the team,” said Perez, who somehow doesn’t have a spot on next year’s grand prix grid.

There was a first-lap tangle that took Max Verstappen out of the race with his Red Bull as well as Ferrari’s Charles Leclerc, but everything pivoted around tyre strategies and a late Safety Car period when everything went wrong for Benz.

Then he dug deeply into the disaster.

“Obviously, it was looking good for us until the Safety Car running in a strong one-two, we were fine on the hard tyre and could have stayed out, but we had the gap for a free stop and we took that opportunity.

“I think it was absolutely the right call, but it was a late one and we had a radio problem, which meant we didn’t have the right tyres in the box. Which is why George exited with the wrong tyres and Valtteri left the pits on the same tyres he’d arrived with.

“Then we had to pit George again to correct the mistake. By then, the race was not lost and he battled back in an impressive way; but then he had the slow puncture and that dropped him back.

“These things can happen but obviously we need to investigate the problems, learn from them and move forward.

“It was heart-breaking for George after a monumental drive in his first race with Mercedes and he should have won. It didn’t work out today, but I’m sure this isn’t going to be his last attempt to win a race. For Valtteri, too, it was a difficult race and being on those old tyres at the end was hugely challenging. We’ll make sure we learn from this weekend and come back stronger in Abu Dhabi.”

There is still no word on Hamilton, who could complete his Covid quarantine in time for the season finale, but Ricciardo is keen to finish his Renault run on a high after fifth.

“We go at it again next weekend and try finish the season strong,” he said.