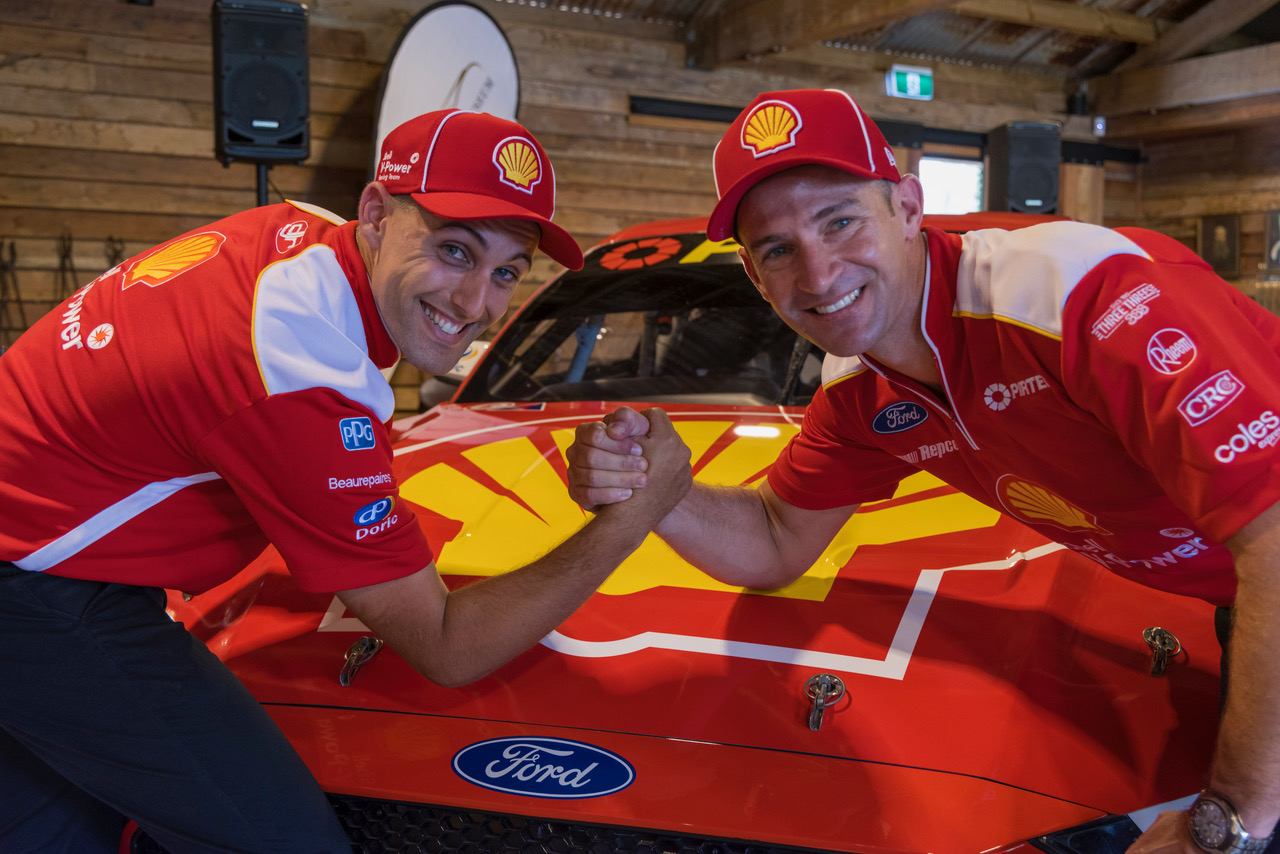 The dynamic new duo at Dick Johnson Racing have a shared vision for success in Supercars.

Will Davison and Anton de Pasquale both believe the way to win is to win together, banking on the existing success created by Scott McLaughlin and the Shell V-Power crew.

They know they will eventually get down to an individual arm-wrestle for supremacy in their Ford Mustangs, but for now they are like Batman and Robin as they roar into action with a new-car shakedown and the first official Supercars test of the season at Queensland Raceway.

“There is no rivalry with Anton. At the end of the day I want to win, but the team element is so crucial,” Davison told Race news.

“If we’re fortunate enough that we’re both challenging for wins and poles then it’s a good situation. I know how helpless you are in this game without the team.”

“We’ll be working together as much as we can. The faster your team mate is, the faster you will be,” said de Pasquale.

“If you’re battling for first position, that’s the ultimate. But you want the whole team as good as you can be.”

The pair combine youth with enthusiasm, even if Davison believes his age is only a number and not a reflection of his standing in Supercars.

“I’m only 38, you know. I’ve still got my best years ahead of me,” said the former title contender with the Holden Racing Team and Ford Performance Racing.

“Anton and I are at separate ends of our careers, but we’ve got to work together.”

He knows better than anyone about the chance he has at DJR, after being dumped in a team upheaval at Tickford Racing last year before a brilliant resurrection at Bathurst when he anchored Cam Waters to victory.

“To get this drive after the circumstances last year makes it a bit more sweet. I had a lot of time to reflect.

“Part of me was thankful. But part of me felt I wasn’t done yet. It’s pretty amazing and I’m just going to grab the opportunity.

“I didn’t want to be a victim. But I wondered if I was going to get that shot again. So I really value and appreciate this opportunity.

“I’m not using any energy on anything but the job at hand. I’m content. Everything happens for a reason.”

De Pasquale also knows he has an express pass to the front of Supercars and is more open than Davison about what is coming.

“Any driver in the pitlane wants to be in the fastest car. We have massive shoes to fill but this is what I live for. I love driving cars,” he said.

“Pressure is good. Any sport is high-pressure, and I’ve always said I put more pressure on myself than anyone can put on me.”

“ The ways I’ve always looked at things is you want to beat everyone first, and your team mate next.”

The highly-rated youngster had a tough year at Erebus in 2020 but knows he has all the right tools, including Davison, to make him a title contender in 2021.

“It’s good to always have someone that can push you along. Especially when you’re racing guys who are already doing that.

“There is big expectation. But I knew that signing up. That’s something I like

“Who wouldn’t enjoy the pressure of being in the fastest car form the previous year? It’s an opportunity we all dream of in our whole life.”

Pressure them about the in-house rivalry and it’s de Pasquale who opens up first.

“It’s a crazy opportunity. It’s a unique situation having two new drivers at DJR,” he said.

“People can say whatever they like. Ultimately I’ve entered every race in my life to win. If you’re going to the racetrack and putting all the effort in then you need to do the best you can.

“As an individual you always set your sights on being as good as you can. In a team like this, it means aiming for the championship. But you also want to win the teams’ championship as well.

He also knows that Davison is more than a rival and could play a crucial role in his success.

“You have to be realistic. You have to be a massive sponge. I’ve got to work out how to make myself good enough. It’s pretty exciting.”

Davison is on the comeback track – again – but is comfortable with his return to the team where he first won in Supercars. He feels wanted and valued and that has always been a key to his racing results.

“I feel completely rejuvenated. I have that exuberance of a young rookie. I’ve certainly got a lot of hunger,” he said.

“At the end of the day, I don’t look at it like my career is on the line. I still have the hunger and desire, as great as ever.

“I’m here to bring results for the team, but also to fit in with the culture and teach Anton anything he can learn from me.”

“I’m not threatened. I’m there to out-perform myself,” said Davison.