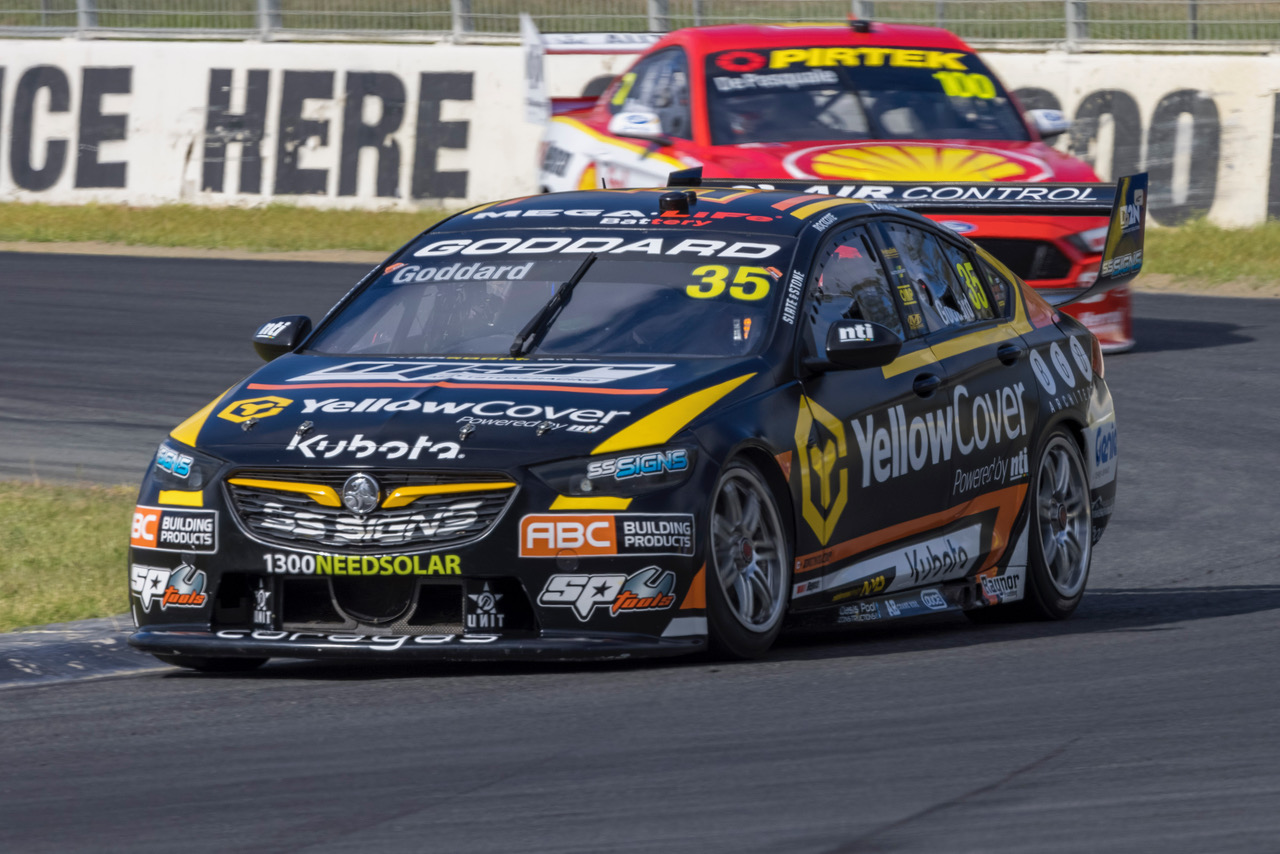 Baking hot weather at Queensland Raceway worked for youngster Zane Goddard at the first pre-season test of the Supercars season.

Goddard banked a quick time within the first 30 minutes of the track opening and his 1 minute 09.0257 mark stood for the rest of the day despite the presence of the heavy hitters from Red Bull Ampol Racing and Shell V-Power Racing.

Anton de Pasquale eventually finished second on 1:09.0318 with his brand-new DJR Mustang but the times were totally unrepresentative as there were none of the ‘happy hour’ qualifying simulations normally seen during testing at QR during the cooler minutes of the final hour.

“You get a good hour at the start of the day,” Goddard reported after his early hot lap.

With the temperature soaring past 35 degrees, and the track temperature well into the 50s, teams generally concentrated on development programs, set-up work, race-distance runs and pitstop practice at the test.

Shane van Gisbergen got the ‘high mileage’ award for the day as he and his Bathurst co-driver Garth Tander completed a total of 156 laps in the #97 Commodore, with his team mate Jamie Whincup – with Craig Lowndes only doing a handful of laps – managing 124 circuits for the day.

“It’s pretty hot, which sucks. But awesome to be back in the car,” said SvG.

But no-one could stop Goddard smiling.

“It’s never a bad thing to see your name at the top,” Goddard said at the end of the day.

“I’m happy with it. It’s a good start to the year. It’s good for the team and morale.”

It was his second day at the track following a rookie run with his team mate Jake Kostecki ahead of the test, but the first time the big names were out on a serious track program.

“At a test day it’s hard to see what everyone is doing. At this point I’m still coming up the ladder, so you’ve got to learn from the best.”

Eight cars were at QR and behind Goddard and de Pasquale the order was Jake Kostecki, Whincup, van Gisbergen, Will Davison, Garry Jacobson and Fabian Coulthard.

The second of the DJR Mustangs had a troubled day, with Davison forced to change the transaxle after a shifting problem and also bothered by some other suspension niggles. His was the only major mechanical drama of the day.

He was eventually sixth on the time sheets, with a 1:09.4946, but clear of the slowest lap of 1:09.8308 credited to Team Sydney boss Jono Webb as he shared his team’s Commodore with new recruit Fabian Coulthard.

Despite the heat, a group of several hundred hardy fans trekked to QR to see the cars in action. But they were restricted to the spectator areas, and kept outside the paddock, but got an unexpected aerial display from a low-flying helicopter pilot who was spraying around the circuit to kill fire ants.

“For me, seeing everyone out here and so many fans on the hill for a test day. It’s pretty awesome how excited everyone is. It’s cool just to be out there,” said SvG.

Apart from a variety of car changes, he was also adjusting to having David Cauchi as his engineer for the first time as Wes McDougall joined Whincup.

“Couple of things today we’ve found. Some have worked, some haven’t.”