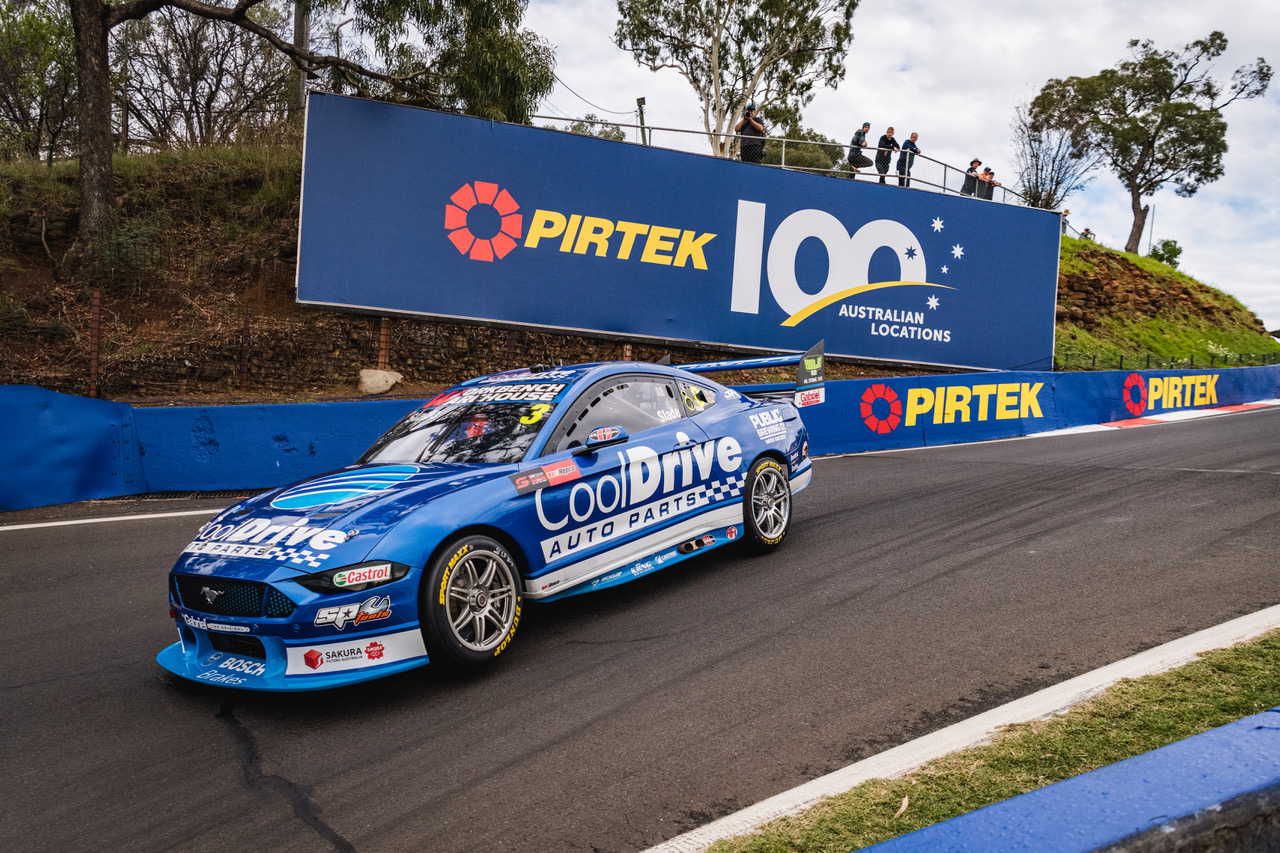 Don’t bother looking for the CoolDrive Mustang at Bathurst today.

The battered remains of the car that Tim Slade hustled onto the front row for the Mount Panorama 500, and then used to pressure Will Davison for a potential podium on Saturday afternoon, are in no shape for racing.

The car could be repaired in time for the second round of the Repco Supercars Championship at Sandown, but even that is a long-shot.

Tim Blanchard, boss of Team CoolDrive, is already investigating a replacement Mustang to ensure the rookie squad is ready to go when the series resumes in Victoria.

“There is a fair bit of chassis damage, front and rear. It’s pretty badly damaged,” Blanchard told Race News while assessing the crashed car in the garage at Bathurst.

“It’s definitely not repairable at the track. We’ll take it back to Melbourne and go from there.

“We’re planning to repair it ourselves, but it depends on the amount of work and what’s involved.”

The good looking blue ’stang is owned by former 23RED team owner Phil Munday, and he has a second Ford racer in his stable.

“Phil has a second car there, so we’ll talk to him. He obviously owns this one,” Blanchard said.

“We might lease the other car off him for Sandown.”

With a tight deadline for Sandown, and Slade still suffering after the shunt, Blanchard was still able to find the positives.

He was happy that Slade was hunting third-placed Will Davison and showing plenty of speed before a missed downshift on the run down the mountain put the car into the wall.

“We all make mistakes. Tim will bounce back,” he said.

“Today’s result doesn’t change anything on that front. He’s the driver for us.

“We didn’t put him in the car for no reason. We have full faith in his ability.

“He is pretty upset at the moment but he’s done a terrific job. And that’s not just this weekend, but all the way through from the start.”

Blanchard, who is operating alongside Tickford Racing with his family-owned team, is already pleased with the early promise.

“We’re a new team, that we started from scratch only three months ago. To turn up for the first race, put it on the front row and be fighting for a podium finish, is fantastic.

“It’s a gut wrenching finish. But we achieved far more than we expected this weekend.”

Why SVG Is The 2021 Supercars Champion