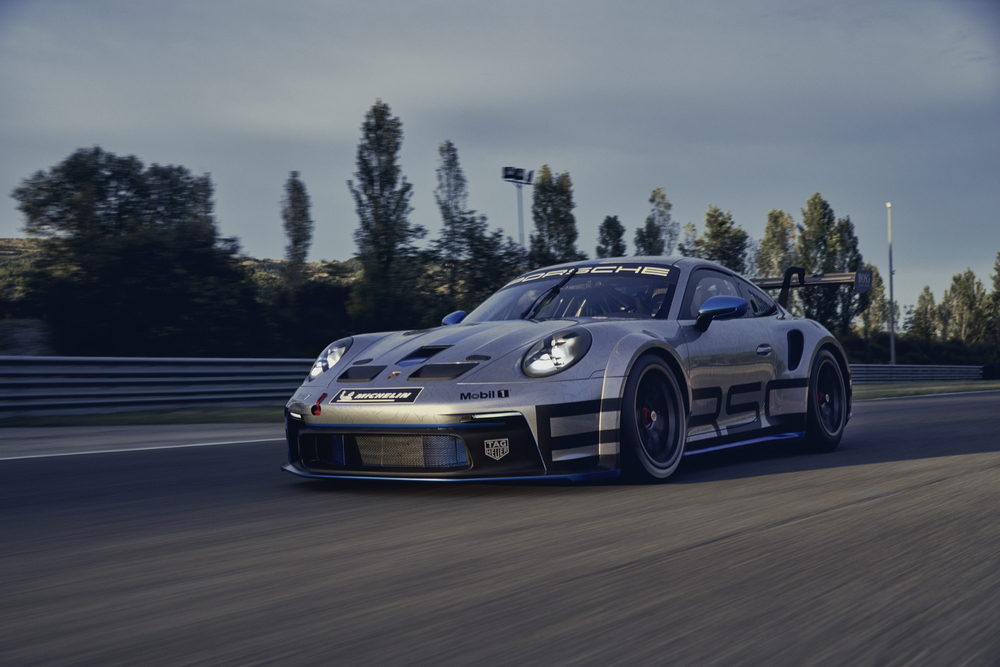 The world’s biggest Carrera Cup contest will fire up at The Bend later this week.

First details of the 30-car grid for 2022 will come as the all-new 992-series Cup car makes its public debut down under.

Potential starters flooded Porsche Cars Australia with requests for the cars, including the benchmark Sonic and McAlrea teams which are both expecting to mount multi-car efforts in next year’s series.

Porsche is not revealing the names of successful bidders for the 992s but is happy to talk about the new car and the success of the series in recent years, including a grid for 2022 that will even trump the Supercup contest that runs on the supporting program at Formula One races.

“We are revealing the 992 next Thursday at The Bend, but we’re not ready yet to talk about the allocation of the cars,” the motorsport manager at Porsche Cars Australia, Troy Bundy, told Race News.

“We are importing 30 cars for the Carrera Cup and another two that will not be raced, but used for the Porsche Driving Experience in Queensland.

“We asked for expressions of interest and we were flooded. Most of the allocation is taken up by existing owners. Those who are already racing Carrera Cup will be getting a car.”

The arrival of the 992 cars has already put a premium on the outgoing 991.2 Cup cars, which will flood into the top level of the Michelin Sprint Challenge series next year.

The Carrera Cup is recovering quickly from the Covid lockdown in 2019 with near-record fields even without the bait of the 992-series model.

“The biggest grid we’ve had in recent years was 26 cars in 2018, when the Gen 2 was launched in Adelaide. We’ll be back at that number at The Bend, and it will be close to 30 cars for the last few races this year.

“We’re looking at deliveries in December or January.”

He believes the new car has raised the resale rate for the existing 991.2 cars as they change hands for Sprint Challenge racing, but tributes many factors to the success of the Carrera Cup.

“We’ve had a really strong program for the past four years. We cater for Pro drivers, and Pro-Am drivers, and young drivers. It’s the combination of that, and also what Porsche does as a package. It’s parts support and social media and all the rest.

“Because the cars are exactly the same there is very even racing. You know what you’re getting,” Bundy said.

“That’s quite exciting for customers. The competition and racing is very good.”

As usual, the all-new Cup cars will be delivered as a turn-key racing deal.

“It’s a complete package. You get the car, two parts packages including rims and bits and pieces, and everything you need to race in the series, even cameras and operational equipment. You collect the car and you’re ready to go racing.”

The 992 is a completely new Cup car, from the wheels to the engine and up to the bodywork and electronics.

“There are a lot of changes. It’s fundamentally a brand-new car. It’s based on the road going 992,” Bundy said.

“The number one change is double-wishbone front suspension. It has a little bit more power, about 50 horsepower, and a lot more downforce. The tyres are wider and the new front tyre is basically the same width as the current rear tyre.

“The car has a lot of technology taken from the GT3 R. Internally, we call it the ‘Baby R’. It’s already running in America and the car is quite a lot quicker.

“The last point, and it’s a big one, is that it has much longer running life for a range of parts, including the engine and gearbox.”

Shifting The Deck Chairs In TCR

The Bend Points To Supercars 2022

Marcos Ambrose will be back on Foxtel screens before the end of the year after a broadcasting debut that was described as “incredible” by...