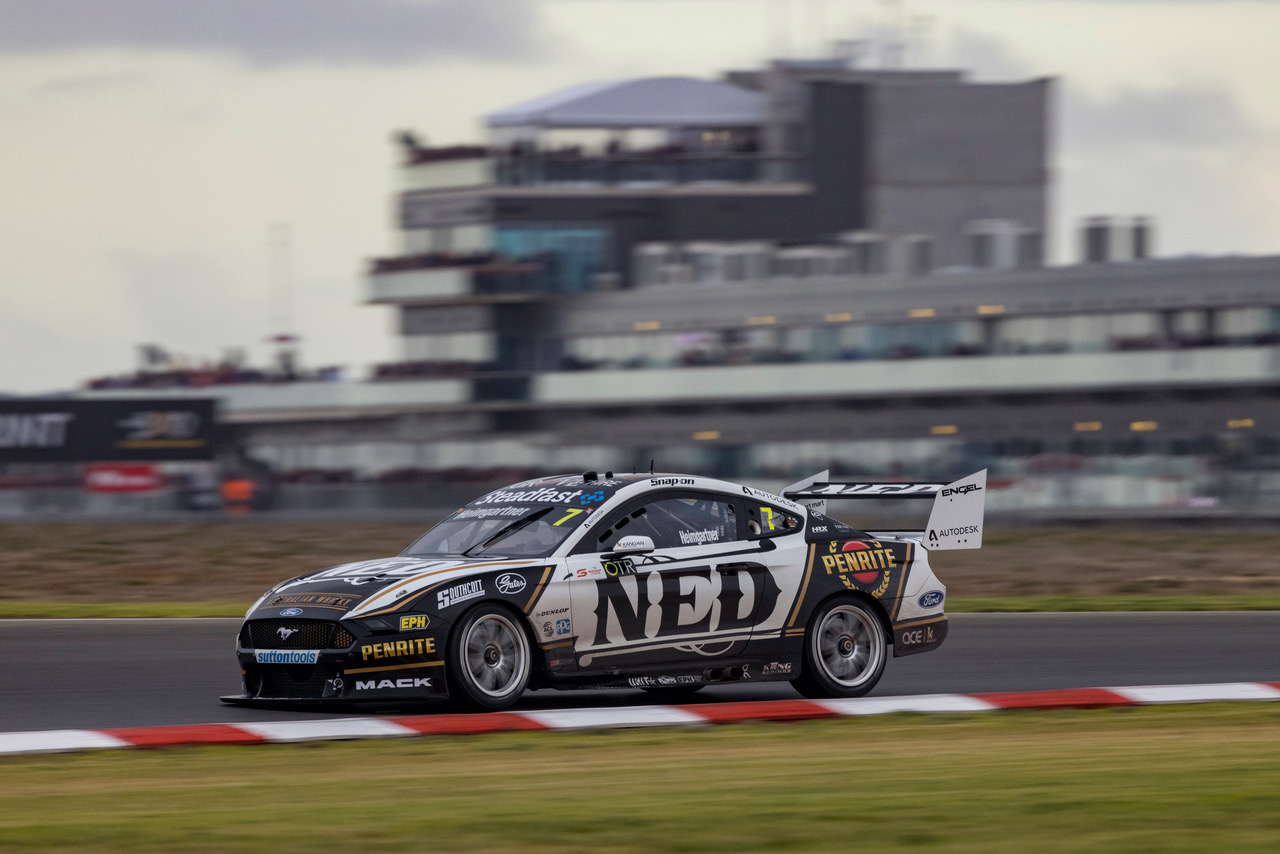 Andre Heimgartner wins his first Supercars race at the OTR SuperSprint The Bend. Event 4 of the Repco Supercars Championship, Tailem Bend, Australia. 8 May 2021

Andre Heimgartner, another in a long line of web-footed Kiwi raiders, drove into the record books with a stand-out drive to victory through a slick and slimy sprint at The Bend outside Adelaide.

Heimgartner put his Ford Mustang on pole position in fully-wet conditions, led from the grid on a damp track, then powered home to a breakthrough win.

It’s taken him six years to become a winner in the Repco Supercars championship and he also brought a landmark Ford Mustang success for the Kelly Grove Racing team despite a five-second penalty for bumping Jamie Whincup’s Commodore during his pitstop.

“Massive relief,” was Heimgartner’s reaction after his win.

“When I had contact I knew I’d made it much harder for myself. I’m over the moon that I was able to get that five seconds.”

Heimgartner led home Chaz Mostert, who again showed the speed in his WAU Commodore that earned him a last-start win in Tasmania, while Anton de Pasquale continued his improvement as a regular front-runner at the Shell V-Power Racing Team to finish third in his Mustang.

Nick Percat led for much of the race after a massive gamble with his Commodore, starting on slick tyres from the back of the grid, but lost a potential podium in the dying laps during a torrid tussle with de Pasquale and Cam Waters.

“I actually drove off the road on the last lap. I think it’s one that got away. The boys did a mega job and the car was super quick,” he admitted.

Percat had earlier given his mum a surprise gift – a tandem parachute jump over the circuit – that she shared with Thomas Randle’s mother.

Heimgartner joined an honour roll of wet-weather experts from New Zealand that stretches back to Jim Richards and includes this year’s Supercars championship leader Shane van Gisbergen, who overcame several setbacks to finish seventh. He ran off the road at one stage, pulled up too wide for the crew during his pitstop for tyres, but was still as quick as always in the tricky conditions.

But his team boss, Todd Kelly, gave as much credit to his hard work and commitment as his raw speed after giving him a second chance in Supercars.

“Hell, he’s driving that car well. This is the result of all the effort we’ve put in,” said Kelly.

The championship position was largely unchanged in the first of the three races at the OTR Supersprint, although Mark Winterbottom lost momentum when a power steering problem in his Commodore – which he raced using the large-diameter ‘bus’ steering wheel borrowed from Red Bull Ampol Racing – left him trailing at the tail.

Despite the conditions, which saw de Pasquale and Mostert both bungle moves to the front on the opening lap – after a massive multi-car crash at the start of the Carrera Cup contest earlier in the day – David Reynolds was the only retirement after contact that damaged his Mustang’s steering.

“I just stuffed it up. But we’ve got two races tomorrow to do it again,” said Reynolds.

That’s the same feeling for most of the grid, with the promise of fine weather for the twin 24-lap sprints on Sunday, but particularly for Mostert and de Pasquale.

“They had one fast race car. And Andre drove it fantastic. We were just lacking a little bit. Starting in second place it was a bit of a boring race for us,” he said.

“We didn’t quite have the performance. We’ll try and make it a little bit more speedy for tomorrow.”

“We’re here to put on a show. I led the race for about two seconds,” said de Pasquale.

“It was good fun. Happy to get a podium. Hopefully we can do a bit better tomorrow.”