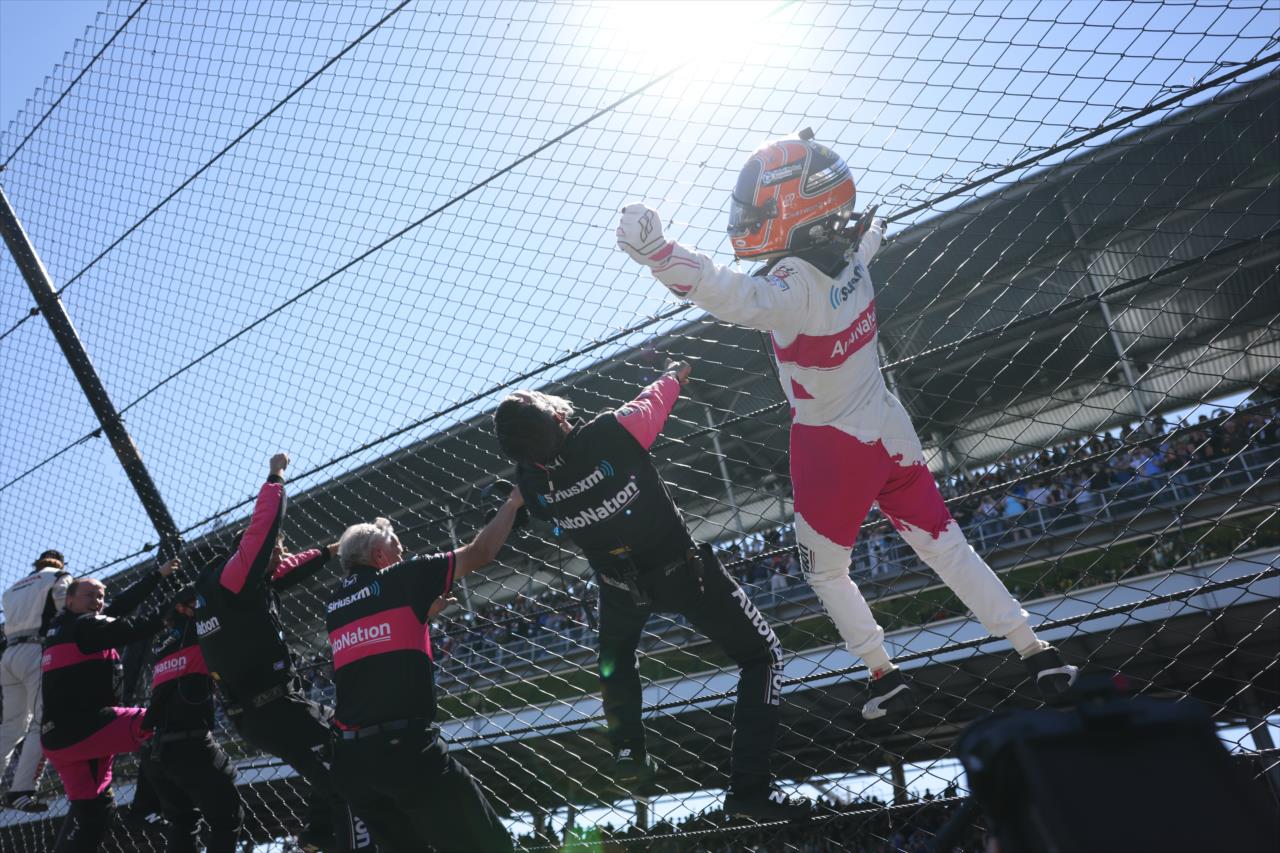 Helio Castroneves was not good enough for Roger Penske’s IndyCar team but he was good enough to win for a landmark fourth time in the 2021 running of the Indianapolis 500.

The 46-year-old veteran did the job for the lowly-rated Meyer Shank Racing team after starting eighth as the powerhouse Team Penske struggled, although Simon Pagenaud made it up to third at the flag behind youngster Alex Palou as Scott McLaughlin was the best-placed rookie in 20th.

Castroneves’ victory was his fourth and ties him with legendary drivers AJ Foyt, Al Unser and Rick Mears on the all-time winners’ list.

It comes after Castroneves was first pushed sideways into sports car racing with Team Penske, along with Juan-Pablo Montoya who also raced at Indy, then was left without a full-time IndyCar ride.

To prove his commitment to Meyer Shank he has attended each of this year’s IndyCar races and even fronted at 7am at the team’s race base for pitstop practice, where he drove the car into the simulated Indy pitlane.

The racer known as Spiderman completed his signature climb up the debris fencing on the front straight after his win, in front of 135,000 fans, at the biggest sporting event since the start of the Covid-19 pandemic, before celebrating in grand style.

“The old guys still got it, kicking the young guys’ butts. We’re teaching them a lesson,” he said.

“I don’t know if it’s a good comparison, but Tom Brady won a Super Bowl, Phil (Mickelson) won the PGA, and now here you go.

“I love Indianapolis. The fans, they give me energy! I’m serious.”

The 105th running of the Indy 500 took place in cool conditions under bright skies, with plenty of single-file racing to save fuel and several three and four-wide moments during re-starts.

The biggest casualty of the day was pole-sitter Scott Dixon, who was tripped-up during a caution caused when Stefan Wilson crashed while braking into the pits. Dixon ran out of fuel and then lost a lap to the leaders when his car refused to start, a problem shared with Alexander Rossi. He was eventually 17th.

The other crash victims were led by Graham Rahal, who hit the wall when a rear tyre left the car after a pitstop.

McLaughlin was solid in the Top 10 through the first half of the race, even rising to fourth during pitstops, but a braking mistake coming into the pits gave him a giant fright and also earned him a drive-through penalty that sent him to the rear of the field.

“I felt like up until that pit stop we were really solid. I was saving good fuel, the car was good. I was learning a ton. I made some pretty cool passes which I really enjoyed,” he said.

“(But) One mistake just eats you. You can’t make mistakes here. It genuinely needs to be a perfect day. It’s a place that really bites you.”

The pits also caught the only Aussie in the field, former winner Will Power, as he spun and eventually trailed home in 30th place, only one spot ahead of former Supercars racer Simon de Silvestro.