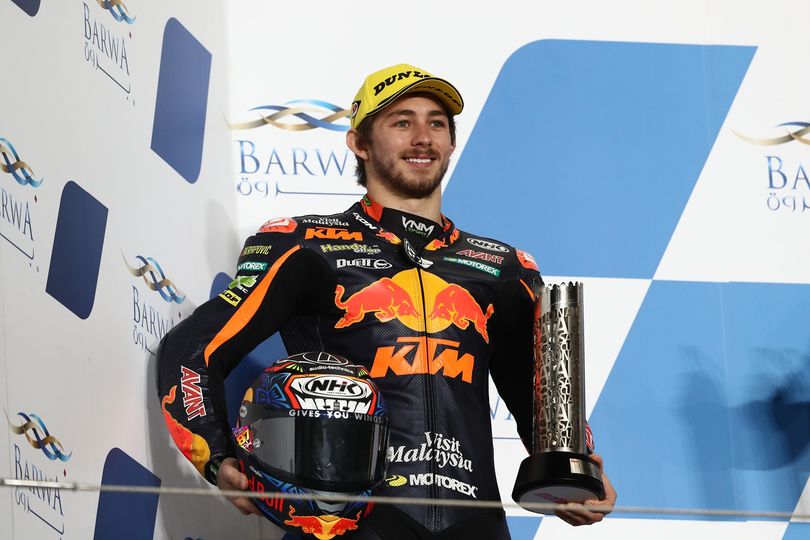 As Gardner Jnr is tapped by KTM for a promotion next year, his father believes Remy will be more suited to the top-class bikes than he has been through the junior ranks.

Even so, Gardner is a last-start winner from the Italian Grand Prix at Mugello and leading this year’s Moto2 championship standings.

“I know MotoGP will be a great fit for your talent , size and weight, as these bikes have over 250 horsepower which you will love,” Gardner told his son.

“Hard work and persistence does pay off. This journey has not been easy with many many challenges over many years since this journey began.

“But, interestingly, it’s 30 years this year since my last season in MotoGP back in 1992.”

Remy already recognises his father’s achieving by racing with number 87, the year Wayne became world 500cc champion, and he is likely to take the number into MotoGP when he joins the Tech3 KTM factory team next year on an RC16.

His promotion has been an open secret in MotoGP since the start of the year but his mature ride to victory in Italy made it easier to confirm his promotion for 2022. He has been groomed through one year in Moto3, where he was far too big for the bikes, and five seasons in Moto2.

“It’s a real pleasure to bring Remy to MotoGP next season because we knew about his speed and ability for Moto2 and he has confirmed that potential,” said Pit Beirer, KTM’s motorsport director.

“We believe there is much more to come from him and it’s important he has this opportunity to keep growing. He’s super-determined and never gives up.”

Gardner is the third rider to graduate from KTM’s Rider Academy, after MotoGP race winners Brad Binder and Miguel Oliviera.

KTM believes his early signing for 2022 will now allow him to push for the Moto2 crown this year.

“I think having taken this decision is now going to help Remy to focus 100 per cent on his Moto2 world championship,” said Herve Poncharal, team principal for Tech3 KTM.

Although the promotion is welcomed by the whole Gardner clan, his mother Toni – who lives in Greece – is particularly emotional.

“I’m so proud and happy for you. My nerve count will go through the roof next year, if it isn’t bad enough as it is,” she said.

“But finally one more step toward your dream.”