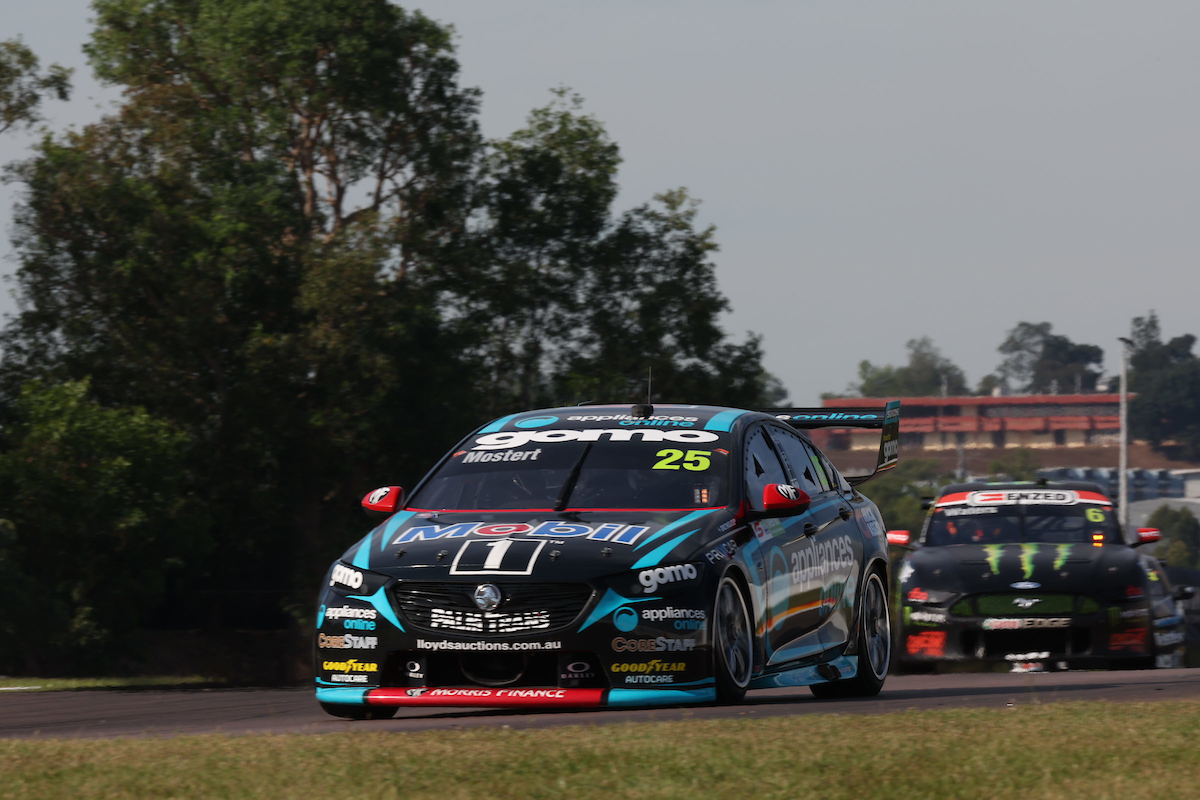 A catastrophe in the pits cost Shane van Gisbergen an easy win in the first of three Darwin dashes in the Repco Supercars Championship.

The championship leader snatched the lead into the first corner and was looking unstoppable in front, helped by a chaotic opening lap behind him, until the left-rear wheel could not be removed at his pitstop.

Van Gisbergen lost 30 seconds but drove as brilliantly as always to cross the line only 28.5 seconds behind the eventual winner, Chaz Mostert, despite having to battle from last spot back to 13th at the flag.

Mostert was only eighth on the grid, but was able to avoid the melee at the first corner and ran A-to-B to take his second win of the season and his first since signing a fresh multi-year renewal with Walkinshaw Andretti United. The victory also lifted him to third in the championship standings.

“To start eighth and finish first is like a dream come true,” Mostert said.

“I lucked out and came of Turn 1 in third. Probably lucky we started on the fourth row.

“It’s good to have a fast car. We’ll take them when we can get them.”

Cam Waters was also solid in second, as he and Mostert both joked that they manage to avoid contact despite their long-term history of collisions. He had to pass Nick Percat for the spot and was happy to grab a big bundle of championship points.

“I had an awesome battle with Nick. It’s cool to race someone like that. Rubbing a little bit,” said Waters.

But Percat also faced a penalty for running his Dunlop tyres below the minimum starting pressure, which could drop him off the podium.

There was plenty of drama through the race, right though to James Courtney and Brodie Kostecki banging into each other in their Boost-mobiles in an incident that led to a penalty for Kostecki that dropped him from fifth to ninth for short-cutting the course.

But the biggest drama came at the start, and Scott Pye was hugely apologetic about triggering a multi-car collision that took six cars out of contention when he smacked into the back pole sitter Anton de Pasquale’s Mustang – earning a drive-through penalty.

“Screwed up. I misjudged it. It was game over,” said Pye.

“I was committed and I couldn’t pull it up. I said sorry to Anton. At the end of the day I wrecked him and it was my fault.

Despite the potential penalty, Percat was happy to celebrate his third.

“That’s the team’s department. I feel like as a driver I did my bit. It’s nice to get a trophy and bring a straight car home,” Percat said.

For the Supercars technical chief, the tyre-pressure setting is an open-and-shut case.

“There is a rule book. We’ve got to enforce it,” said Adrian Burgess.

Lots of drivers had a tough time in Darwin, but there were also some celebrations.

“To start 22nd and finish 5th is an awesome result,” said Will Brown.

Andre Heimgartner improved by 15th places and is hopeful of a better Sunday in his Mustang.

“It was a bit of a battle. Hopefully tomorrow we can turn it around tomorrow. We need to get these cars further up,” he said.

But no-one was more disappointed than Mark Winterbottom, who started from the front row but didn’t get past the first corner. His engine shut down on the formation lap and did it again after he jumped de Pasquale at the start, leaving him vulnerable in the first-corner carnage.

“This sport gives me the shits sometimes. It’s so cruel. I beat him off the line and then the thing conked out. The car is quick. Just shit,” he said.