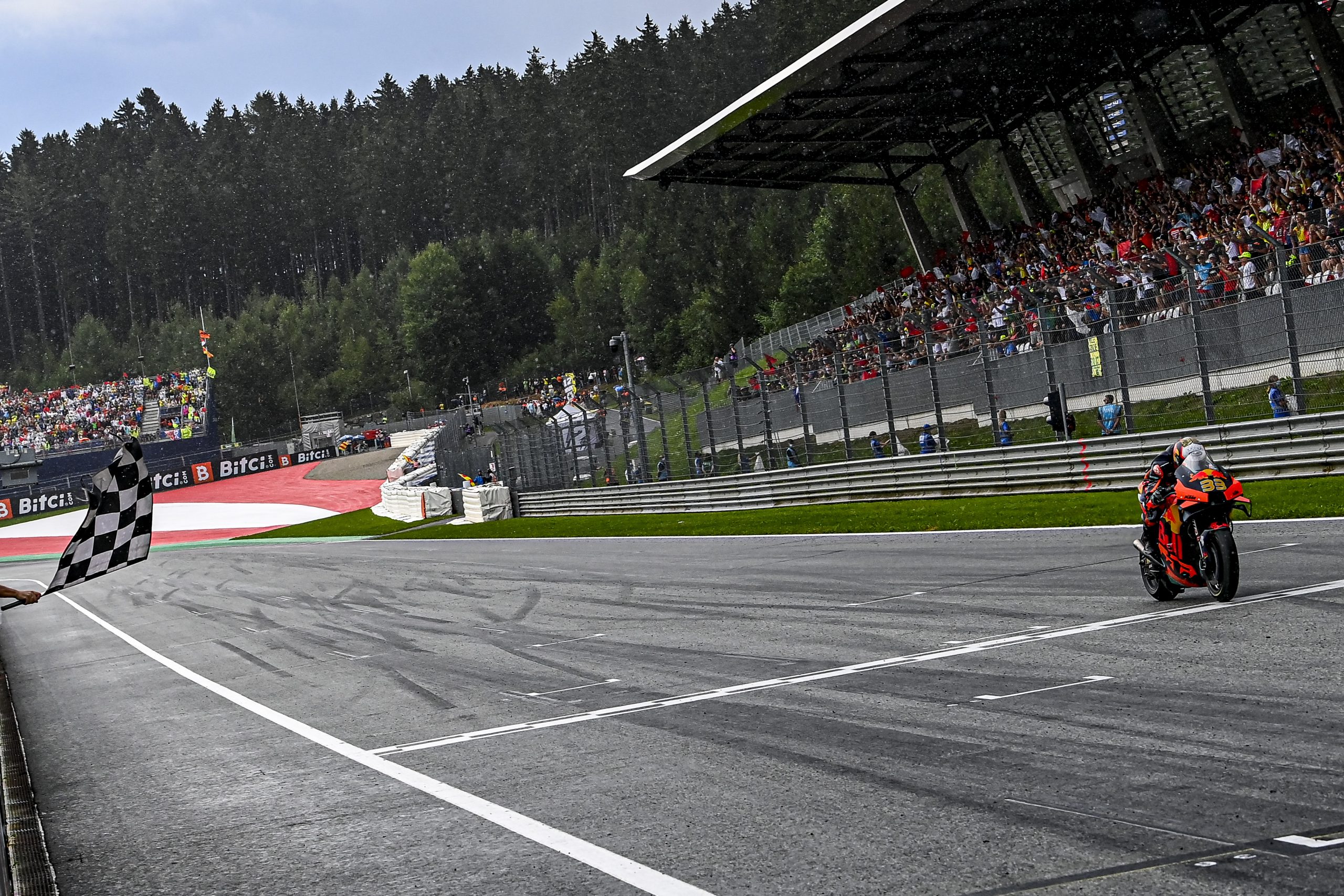 A combination of brilliance and bravery gave Brad Binder a sensational victory in the Austrian MotoGP at the Red Bull Ring.

Binder gambled on slick tyres on a soaking wet track, wobbling to the win as his rivals stormed back through the pack for the minor placings after changing bikes for wet tyres.

It was only his second MotoGP win but could not have come at a better place, as KTM is based in Austria, or in a more sensational finish in one of the great MotoGP races.

Remy Gardner continues to lead the Moto2 standings despite only finishing seventh in the second of back-to-back weekends in Austria, while Jack Miller faded after a strong start for Ducati in the MotoGP main event and could only manage 11th after a mishap on his bike change.

Binder was mobbed by his KTM crew after the win, which he put down to the family’s never-say-die approach to racing.

“When I saw everyone tipping into the pits, I saw an opportunity and I decided I’d rather risk it and crash rather than maybe get top five. Huge gamble, but I’m really glad it paid off,” says Binder.

For most of the race it looked as if Ducati power would get one of its riders to the flag in front, even if Marc Marquez was solidly in contention after gambling on a soft-compound rear tyre under the threat of rain.

But as it stared to sprinkle, and then storm, the form book went out of the window and Marquez even fell out of contention despite switching his Honda to wet tyres.

There was amazing action on the slick track, firstly as riders tried to survive and then as the wet-tyred riders stormed back through the field in the final two laps. No-one was sure until the flag – and beyond – that Binder could win, as he was hit with a three-second penalty for exceeding track limits on his final lap.

Ducati riders eventually took the minor placings, with Francesco Bagnaia and Jorge Martin filling the podium, although Fabio Quartararo continues to lead the championship for Yamaha despite finishing seventh.

It was his rivals who knew the best about Binder’s win.

“For sure, Brad did something amazing today,” says Martin.

But even he could barely understand what he had achieved.

“That was really scary. It was like riding on ice. A couple of times I thought I was over,” says Binder.

“I knew, when there were three laps to go, if I didn’t come in when they did I wasn’t going to come in at all. And yeah, I made it to the end somehow! The biggest problem was no brakes, the carbon brakes were cold and as soon as the rear tyre cooled off I couldn’t open the throttle either.

“Somehow I made it round the track, and a couple of times I thought it was over but I kept it up straight. So happy, so happy this gamble paid off.”