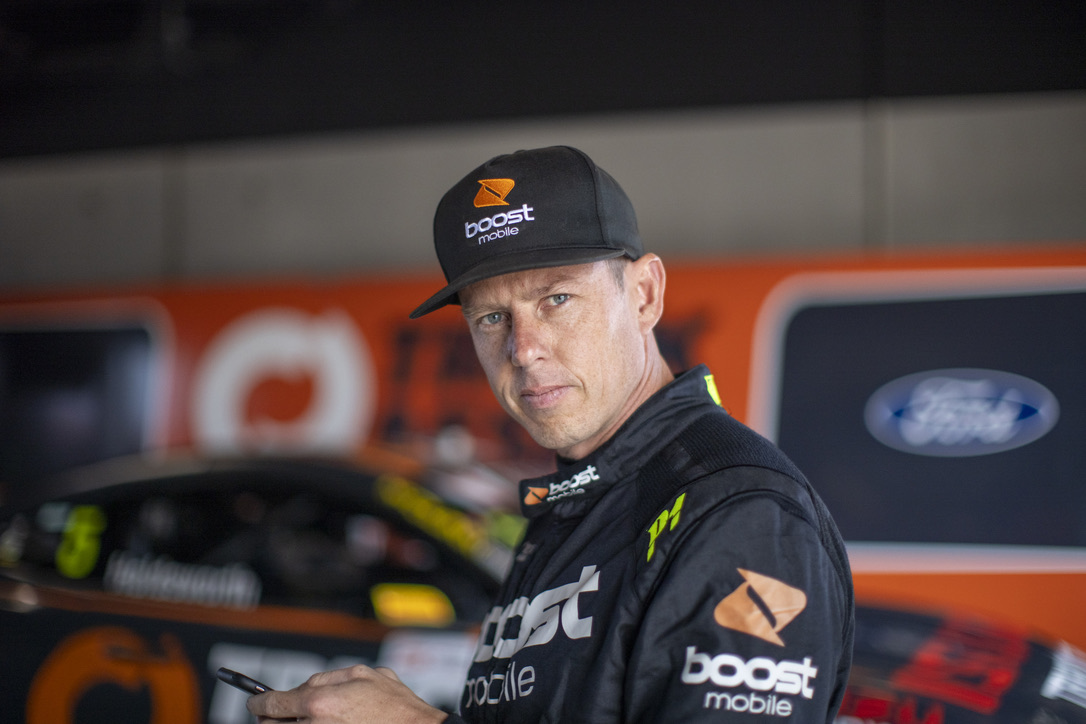 Racing in pain is nothing new to James Courtney, who has suffered more major injuries than any other driver in Supercars.

After admitting he has raced his Boost Mobile Mustang this year with a broken shoulder, after a footie collision while playing with his son Cadel, the former series champion says he has been injured many times but always carried on competing.

“The shoulder is all fine now. As for racing with it, to be honest I didn’t notice it. There is so much stuff going on when I’m racing, like trying not to die and pass the guy in front,” Courtney tells Race.news

“I really didn’t notice it. There were no bones hanging out or anything.

“I hate going to the doctor and complaining. I tend to wait and hope things just get better. If my partner Tegan hadn’t hurt her foot, and I hadn’t been talked into an MRI, I would never have known about the shoulder thing.”

Courtney’s worst crash was in 2002 at Monza in Italy, while he was testing a Formula One car for the Jaguar team. He hit the barriers at the first chicane at the end of the 320km/h main straight after a rear wheel detached from the car and was knocked unconscious and left paralysed down one side. He could easily have died.

As it was, the crash – which has left him partially deaf in one ear – cost him the British Formula 3 championship and his bit break in F1, and set him on a path that took him to Japan and then home for Supercars.

But Courtney had been injured before. Many times. He crashed so often in his billycart that the doctors at the emergency department at Penrith in Sydney asked if he was being mistreated by anyone.

“I was loose as a kid, always doing stupid stuff and hurting myself. Whether it was rolling the billycart into the neighbour’s garden, or jumping the BMX bike and not making it over the fire pit. There was always something going on.”

Things didn’t get much better when he moved into karting, although his worst injury was when he crashed his scooter on the road in Italy and removed a lot of skin.

“It was pretty intense. Guys were breaking ribs and sternums, all the way through. The crash on the scooter in Europe was utter stupidity.”

In Supercars, he was badly hurt at Phillip Island when Alex Prema spun into the side of his HRT Commodore at Honda Corner.

“I had the leg thing with Prema, then the the rib thing at Sydney Motorsport Park, and now the shoulder thing. I’m sure there is other stuff along the way,” he says.

The broken leg in the Prema crash still pains him, even though he benefits from the warm weather at his home on the Gold Coast.

“It broke my leg. But when I got hit the steering wheel spun around and it jammed my hand on the right-hand side. The pinkie finger on my right hand is probably the worst.

“I’ve still got pins-and-needles in my leg, and my knee. The pinkie really hurts because of the cold, even up here.“

But it’s the incident at SMP, when he was felled by a metal sign that was sent flying by the downdraft from a helicopter, that causes him the most pain. He had various therapies for more than a year but nothing has given him long-term relief.

“Definitely the rib thing was the worst. I had that epidural thing for months. I had a bum bag that I had to walk around with to pump needles into me,” he says.

“When I’m breathing I can feel it. That’s definitely the thing that is not pleasant.”

But, typically, Courtney can spin a positive from the pains of racing.

“I have been through a divorce. I think that’s worse,” he laughs, with an ironic smile.

He has ways of coping and says he is living a great life, even in the twilight of his full-time Supercars career. It’s a bonus that he has Tegan, who is up for fun and helping him to build his social media following.

“Nothing to worry about. A great partner, wonderful kids. Life is pretty damn fine.”

But, as he prepares for the resumption of Supercars racing, Courtney knows he needs to be fully fit and focussed to keep pushing with his Boost Mobile Mustang.

“I’m pretty good at blocking crap out. Everyone has their little ticks and nicks. When it’s time to go racing, I’ll be ready and pumped. I’ve definitely had some crap going on in the past few years but it’s nothing to worry about.”