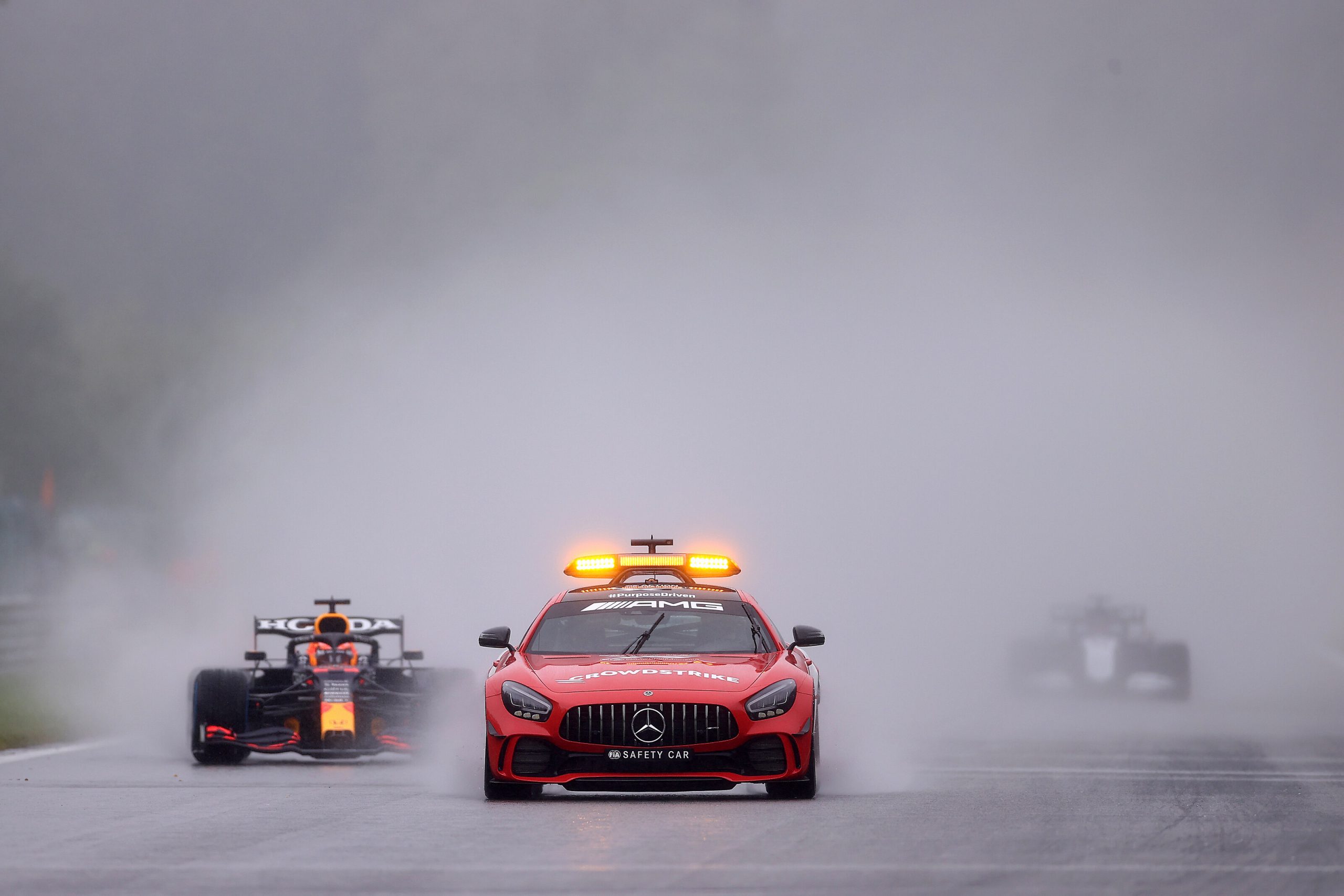 There was no racing but Max Verstappen was the winner of the 2021 Belgian Grand Prix.

As persistent rain lashed the Spa circuit on a miserable day in the Belgian forest, the only track laps were completed behind the Safety Car and half points were awarded for the shortest race in Formula One history.

Conditions were too treacherous for the cars to be unleashed, and so pole-sitter Verstappen picked up the prize for Red Bull Racing and narrowed the margin to Lewis Hamilton of Mercedes to just three points at the top of the points table.

George Russell, who had starred in qualifying to put his unlikely Williams on the front row, was rewarded with second place ahead of Hamilton and Daniel Ricciardo.

A bruised Lando Norris returned for the race after his massive qualifying crash at more than 250km/h, after overnight repairs to his battered McLaren, but a grid penalty for changing the gearbox left him 14th.

“It was just impossible in these conditions,” says Verstappen. “It is always good to win, and and the points are important, but today is not how anyone wants to do it.”

The fans, many of them members or the Orange Army that now follows Verstappen to European races, suffered through a miserable day and were thanked for their stoic commitment by all the leading drivers.

“Sorry to the fans and everyone that stayed out here all day to watch us race, they were awesome,” says Ricciardo. “We were really hoping to get a race and obviously it didn’t happen, but it’s no-one’s fault, it’s just the situation and circumstances today. We’ve got two races on consecutive weekends now so hopefully that makes up for it.”

The triple-header, which now takes teams to Verstappen’s home race at the revamped Zandvoort track in Holland and then Monza in Italy, which will be the second race to include a ‘Qualifying Sprint’ on Saturday, promised to show the pecking order in F1 after the mid-season break. But nothing is clear after Mercedes struggled for pace at Spa but and Red Bull was quicker in qualifying.

The margin is tight at the top of the table, but Hamilton was more concerned about safety than the championship.

“You couldn’t see the car ahead, there was aquaplaning, it was so, so tricky out there. It’s a shame because of course I wanted to race and I love this track as well. I think it would have been a great race if it hadn’t rained so hard, but unfortunately it just didn’t stop,” he says.