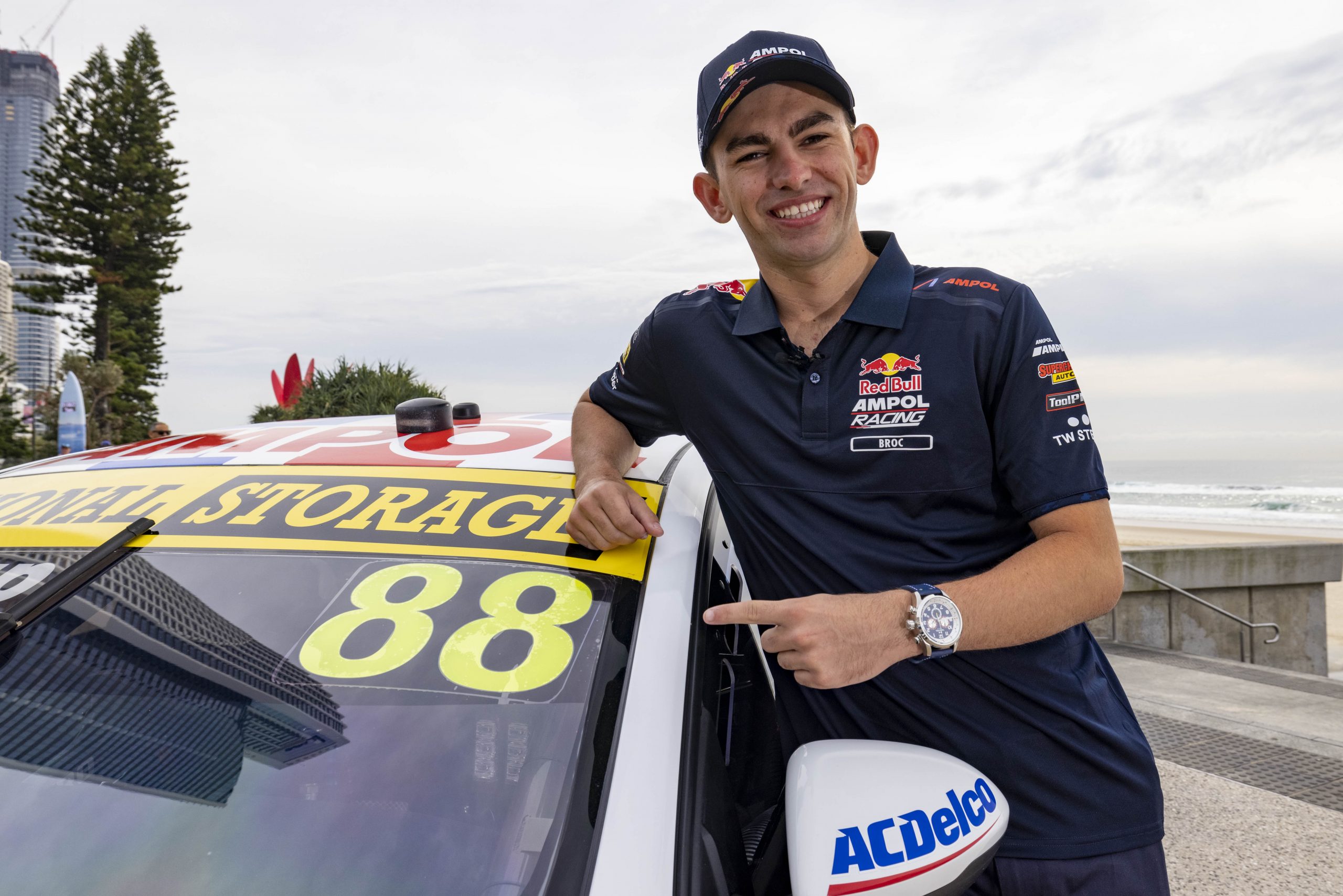 Roland Dane says one thing tipped the scales in favour of 18-year-old Broc Feeney when he was finalising the talent search for a Supercars successor to Jamie Whincup.

“We’re giving a talented kid a massive opportunity. He can go out there and swing freely.”

It’s that simple for Dane, while Jamie Whincup – who steps up to Team Principal at Red Bull Ampol racing when he steps out of the #88 Commodore at the end of the season – believes Feeney is already the real deal.

“He has everything we were looking for in a driver. It’s his work ethic. The right morals. What he says. He wanted it more than anyone,” Whincup tells Race.news.

Whincup knows because he has been where is Feeney is now, back when he joined Triple Eight Race Engineering in 2005 as the young sidekick to Craig Lowndes. He had been rejected by Garry Rogers, was prepared to race for a pittance, and was ready to model himself on Lowndes – from his seat position to his cornering style – to drive himself forward.

“It feels like yesterday that I was in exactly the same situation,” he says.

But one thing is different, Whincup emphasises, when he talks about taking a rookie into the hot seat in Supercars in 2022. And it’s a big positive for Feeney.

“I don’t think he’s got any pressure on him. I think I’ve got the most pressure. I’ve got to provide the environment where he can thrive.”

The official confirmation of Feeney’s promotion to the Main Game with T8, alongside the sands of Main Beach at Surfers Paradise, feels more like a family reunion than a typical media call.

Feeney’s whole family is present, including his excited grandmother, and the T8 contingent includes major shareholder Tony Quinn, Whincup as team principal, and Dane as the godfather.

“When Roland told me the news I was in shock. He explained everything to me and basically asked how it sounded – I said it sounded bloody awesome. I got out of that meeting and rang my parents straight away. I was almost crying. It was such a big relief as we’ve all put in so much effort the last few years, and it’s a day I’ll never forget,” says Feeney.

Paul Feeney is a successful businessman who admits he has spent big to create the breaks for his son, but he also has the heart of a racer and the smarts of a motorcycle salesman. He was a factory Kawasaki superbike rider in the 1980s, when his friend Mick Doohan was one of his rivals, and he was known for his wild style, bravery and absolute commitment to winning.

He says he would have been happy if Broc had followed him into motorcycle racing, and the youngster had shown plenty of early speed. But everything changed on a family holiday to Thailand.

“I was more than happy to have him racing motorbikes. He was exceptional on bikes. But when he was about 10 we went to Pukhet, and there are no rules, so he went into a fast kart and straight away he was on it,” Feeney tells Race.news.

“We came back and then next year we got him a kart and he started racing.”

Feeney had to originally part-fund his son’s move into the crack Triple Eight outfit at Banyo in Brisbane, but the youngster has also benefitted from close ties to Paul Morris and the Norwell training facility where he often cuts track laps. There was still schooling to complete while he did work experience at Norwell, to ensure he had a safety net, even if that is irrelevant now.

“It’s a dream come true. I’ve finished school. No Uni for me, I’m going to be racing cars,” Feeney says.

The way Dane was rating Feeney through 2021 was obvious when the youngster lined up in a Hyundai Excel in the supporting races during the Supercars meeting at Hidden Valley this year. Everyone was still dodging questions about the #88 drive, but why else would anyone spend the money and make the commitment to race in Darwin unless it was laying the foundations for something bigger in Supercars?

When Dane was treating Feeney more like a son than just another racing driver during the following meeting at Townsville, whooping and cheering when his kid scored big in a Super2 Commodore that’s been draped in Red Bull colours this year, it was clear he was the leading contender. But Dane is all business when it comes to business.

“Any driver who comes into our team has to perform,” he says. “He will have to produce the goods. There is nowhere to hide, for him and for us.”

Part of that challenge will be racing alongside Shane van Gisbergen, who is in the best form of his career and already has both hands on this year’s Supercar championship trophy. He can see some parallels between himself and Feeney.

“I believe in him. I was 18 when I first came over (from New Zealand). You cannot ignore his performance this year. He’s shown everything to prove he’s the best guy for the job,” SvG tells Race.news.

But he knows what the team expects from the rookie, and his hard-nosed attitude means there will be no free kicks from his side of the garage.

“You don’t come to this team to be mentored. I’m not here to coach him. We have to work together to beat everyone else.”

As everyone else talks about Feeney, the kid is relaxed, comfortable and surprisingly mature. If there is pressure, he’s not feeling it for now. He is confident in his ability and in what he needs to do, even though he will be a rookie in season 2022 with the spotlight on everything he does.

“I want to be myself. I’ve got so many great people around me and I can pick what I need from everyone. And the end of the day, I’m going to be doing the best I can,” he says to Race.news

“I’m looking forward to the challenge. The biggest thing for me is to be consistent. I don’t want it to be up and down. It’s going to be a massive learning year for me.

“But I’ve got the best team in pitlane around me. It’s so surreal. A dream come true. It was a complete dream for me. And it’s only just beginning.”