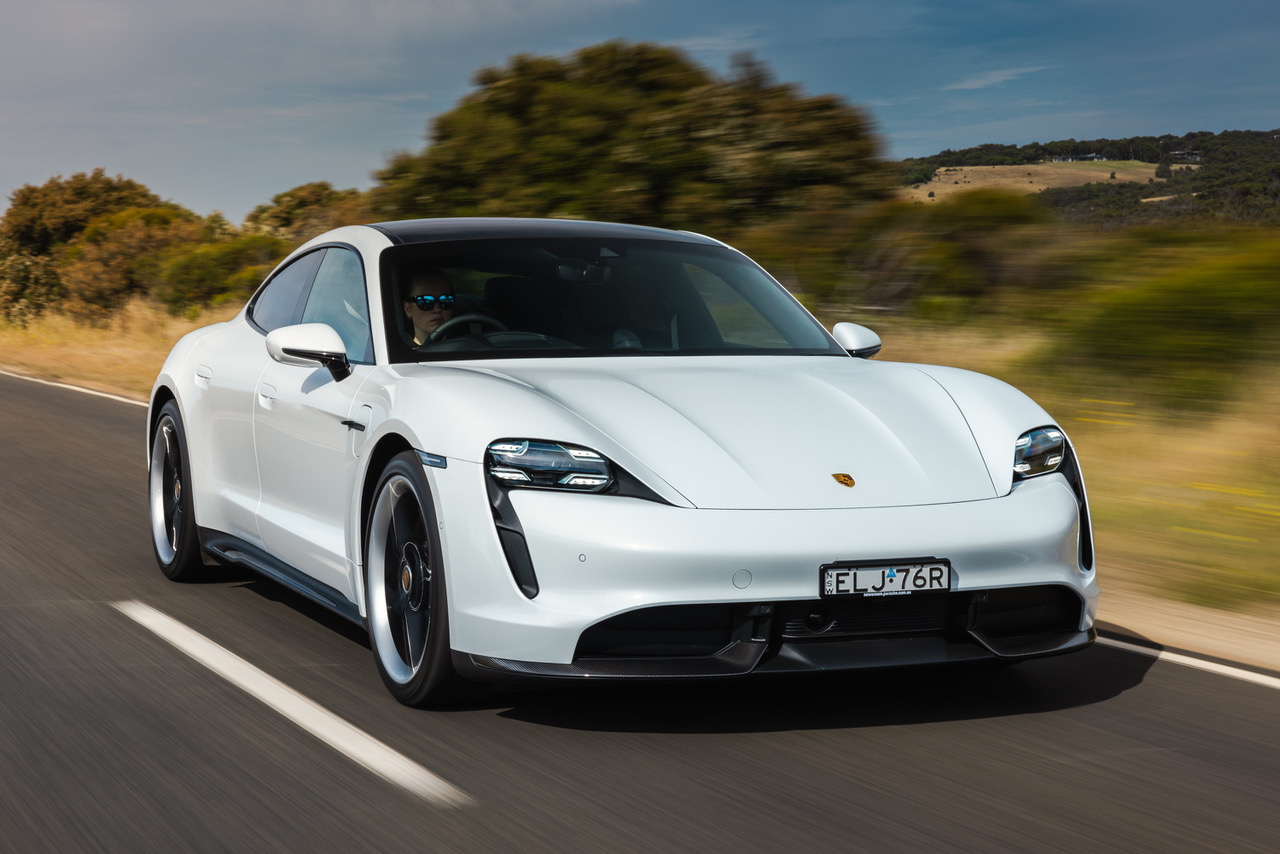 Only a handful of people in the whole world know how it feels to be catapulted off the deck of an aircraft carrier.

Now I think I know, and it’s thanks to the Porsche Taycan Turbo S.

The Taycan can catapult to 100km/h in 2.8 seconds, and do it time after time after time. It pins you back in the seat, usually with a Joker-style smile plastered across your face, in a performance party piece that is tough to toss.

The Taycan is handily quicker than a Supercar in a straight line. And it has four luxury leather seats and air-conditioning.

It’s now the starring act for the global electric car revolution, taking over top spot from Tesla despite a price-tag that puts it firmly into the luxury class and out of the reach of everyday city commuters.

The Taycan is not a replacement for the classic 911, but proves that Porsche knows exactly what it is doing in electrification.

The Turbo S – such a silly name without a turbocharger or even a combustion engine – is a family-sized four-seater that looks and feels much more like a Panamera than a classic 911. Its acceleration is ridiculously impressive, but the Taycan is the first electric car, that I have driven, which feels as quick in the corners as it does in a straight line. That’s not really true, because it is demonically quick away from the lights, but it is a true sports car with great grip and feel in braking and corners.

It can be a four-seater electric limousine with incredible poise and performance and a range of 400 kilometres, but it can also go all Porsche on a twisty road when you’re in the mood.

My son, who is 12, is in awe of the Taycan. It’s not just the slingshot acceleration, either, as he loves the secondary display screen ahead of the front passenger, the plushness of the four-seater cabin, and even the quietness when his mates are watching outside their school. He also likes the artificial engine sound, which is almost nothing like one of the joys of driving a combustion-powered Porsche.

It takes me a while to find the car’s regenerative braking, which Porsche has tuned for minimal intervention – unlike a Hyundai Nexo or Nissan Leaf – so it does not interrupt the traditional driving feel of the car.

Porsche admits that none of its cars is cheap and the Taycan is a worthwhile purchase. It is loaded with technology, from the electric four-wheel drive system and four-wheel steering through to the giant display-focussed dashboard, a button-less cabin that works for the iPad generations, and typically Porsche quality and brakes.

The styling is not particularly futuristic, but marks it as something special.It drives brilliantly and Porsche claims rapid-fire charging, although if – like me – you only have a three-pin plug in the garage then it will take a snail-like 39 hours to fully charge.

Even a nearby 50 kiloWatt-hour rapid charge only adds one per cent of battery boost for each minute on the feed.Still, if you can afford a Taycan then you will have a faster home charger and Porsche provides a Chargefox subscription in a support package that includes eight years and 160,000 kilometres of warranty coverage on the battery.

So the Taycan Turbo S is a technological marvel, brilliantly quick and usable every day, providing the proof that Porsche can play and win in electrification.

But it’s not a car for everyone and the price means even the wealthy will be thinking twice before being cleared for take-off.